Our box demonstrates the atomic bomb and the effect it had on Hiroshima and Nagasaki. You can see the Enola Gay flying above dropping the two bombs on these Japanese cities. Under it is the sight of the rubble and effect the bomb had on Hiroshima and Nagasaki. One of the main creators of the bomb was Albert Einstein; he discovered the theory of relativity. He became a hero under the circumstances because he knew what Germany’s plan was and told Franklin D. Roosevelt. FDR ordered the atomic bomb to be made, and Albert Einstein helped do that and helped the Americans. The atomic bomb caused a lot of destruction in Japan, and eventually forced them to surrender. 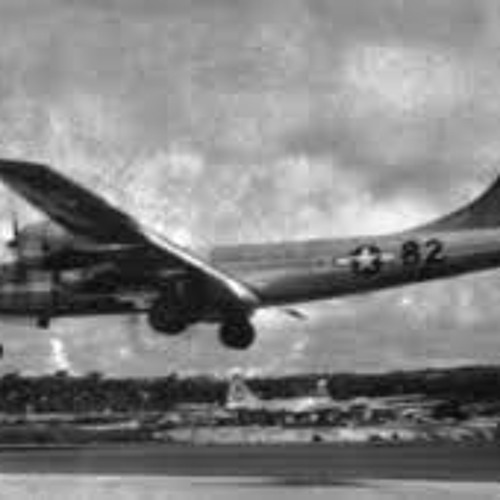 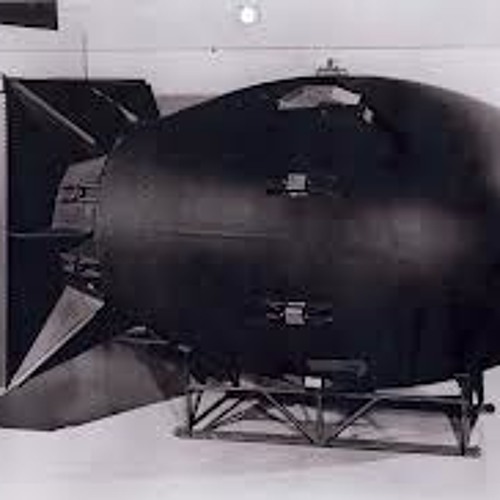 At number two, there is an atomic bomb. This atomic bomb, nicknamed “little boy”, was created in the Manhattan Project. This bomb was used to carry out the mission of bombing Hiroshima. The atomic bomb is a destructive device that gets its force from either fission or a combination of fission and fusion. Another name for an atomic bomb is the fission bomb. The atomic bomb weighs roughly around 2,400 pounds, and costs about 2 billion dollars to make. 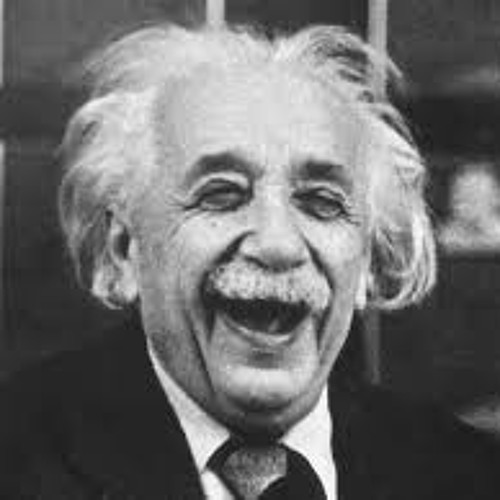 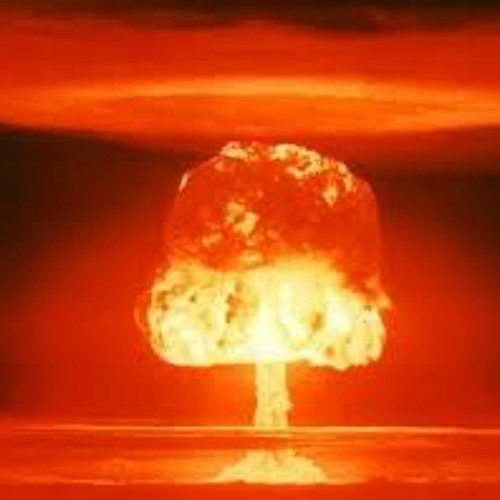 At number four, there are two mushroom clouds. These represent the effects of Hiroshima and Nagasaki. Mushroom clouds are one of the after effects of atomic bombs. They are made up of highly condensed water vapor, and debris released from the bomb. The bomb explodes upward, causing the “stem” of the mushroom cloud, then when it can no longer support it’s weight, it curls around in a circular fashion, causing the air to rotate inside. This causes a “mushroom” effect. Then, to increase the size of it, and to cause the rings, cool air is pulled into the revolving cloud and released from the top. 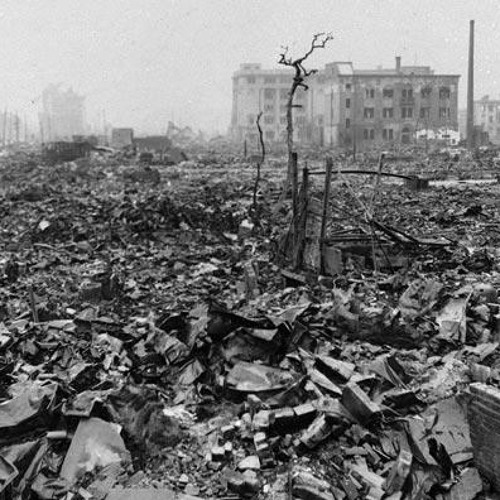 At number five, there is a small amount of people (or bodies), and rubble. This also represents the after effects of the atomic bomb, much like the mushroom clouds. The atomic bomb that hit had a very big effect and killed many people. When the bomb dropped in Hiroshima 90 percent of the city, which is 80,000 people, were immediately killed. Three days later, a second bomb dropped on Nagasaki, killing about 40,000 people. Many others got sick or were severely injured. Buildings fell and the two cities were destroyed. The rubble can show that there was literally nothing left in the cities Hiroshima and Nagasaki. 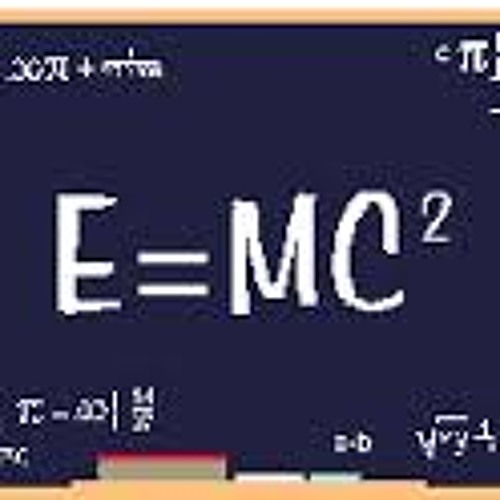 At number six, there is a small paper with the equation E=mc2 written on it. E=mc2 literally means “energy=mass x the speed of light, squared”. This equation was founded by Albert Einstein to show that energy and mass are interchangeable. This equation was also used to create the atomic bombs. It showed the scientists how the bomb would explode, and how dangerous the bomb would be. E=mc2 also shows the function of the energy in the nuclear process. 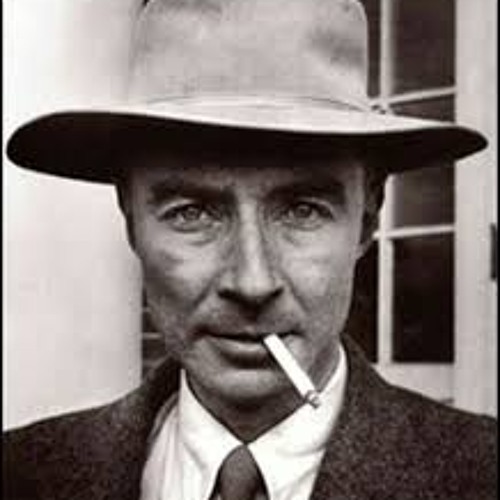 At number seven, there is a model of the Jewish, New York born scientist, Robert Oppenheimer. At the age of seventeen, Oppenheimer attended Harvard University, making his mark in quantum theory across Europe through Cambridge University and Göttigen University in Germany. While working on the Manhattan project, Oppenheimer worked as a director. After working hard on developing the successful atomic bomb, Oppenheimer was named a scientific adviser for the federal government and many other prominent tiles. 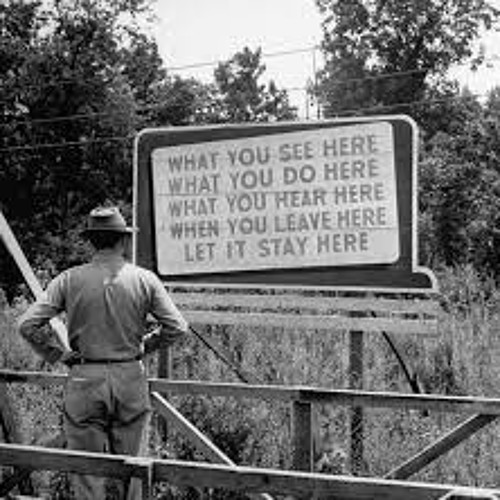 At number eight, there are Albert Einstein and Robert Oppenheimer working on the Manhattan Project. The Manhattan Project was the development and research project that produced the first atomic bomb during the end of WWII. The fear that the Nazis would build a nuclear weapon is what triggered the beginning of the project. Robert Oppenheimer and General Groves worked to recruit the best scientists and mathematicians, including Albert Einstein. Los Alamos, the location where the atomic bomb was built, is where the US continues to build nuclear weapons today. After four years of work, the Manhattan project ended in 1946, after successfully dropping the bombs over Hiroshima and Nagasaki.

The document on August 2, 1939 is a letter from Albert Einstein to FDR. It is saying that we should watch out because the work of Joliot in France it may become possible to set up a nuclear chain reaction in the near future. Einstein is saying that the chain reaction would lead to the making of bombs that destroy huge areas, but may be too heavy to carry by air. Einstein wrote how to achieve the making of a nuclear weapon, and that they would need more uranium.

The document on October 19, 1939 was a response from FDR. FDR responded to Einstein and said thank you for the information. FDR also said that he would try to investigate thoroughly his suggestion of uranium. FDR told Einstein that Dr. Sachs’ will cooperate with this committee.

The document on March 9, 1942 was a letter to the president. It is saying that the US and Great Britain may have a powerful explosive. The work of making this explosive is at full speed. The explosives is more important than what they thought. The bomb will be more powerful thank they thought. 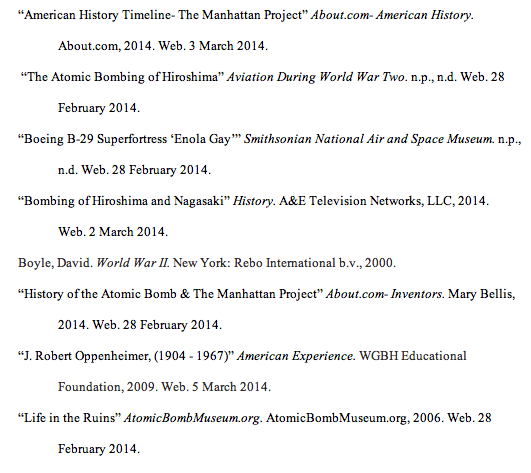 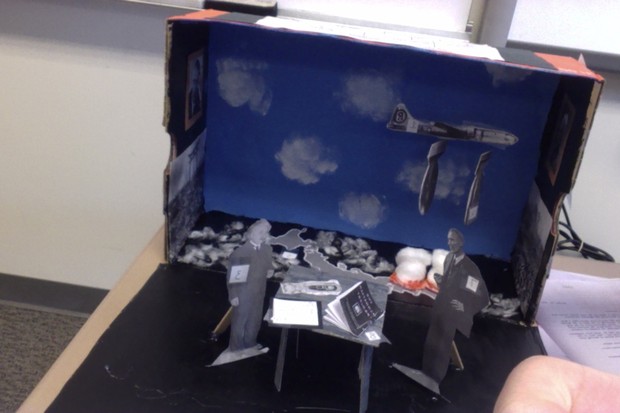