nathalia is using Smore newsletters to spread the word online.

Get email updates from nathalia:

Based on what we had read and viewed upon war we feel that war is only good to an extent. War may be nessasery if theres a reason to it, not just any reason but one that would do some good for not just us but others around us too. In general we feel that war can only be justified if its for the peace and not for natural resources in another country.

1. After scrantons response "a lot of us are very uncomfortable with having conversations about war because we're worried that we disagree." its clear to understand that Scranton feels that no one but themselves who have experienced the war will ever understand what they had went through.

2. It seems as if Scranton used handheld footage from active military because it shows how war is, no edits, no acting and no cuts. Its better to show a better live footage so it gets people a better understanding of where the ones in the armed forces are coming from.

3. Theres a variety of reasons why this film may be important but its clear that its important to our unit because it shows how war not only effects the soldiers but also the civilians in the other countries and the soldiers families.

In the documentary one of the soldiers mentions, "at the moment it seems as if they are doing bad but if you think 20yrs from now this countries going to be a better place because we were here" but will it really? He thinks being there would do good and help or change for the better

Seeing it in a film compared to reading it differed in many ways, the major way in witch it differed was that in the literature we read we couldn't really see how they felt we could only imagine their pain. Whereas in the film we can see their fear and sadness and emotions we are given a face to the emotions. This relates to the perspective that Americans have on war because it finally gives us the truth about war and that it’s a bad thing that isn't necessary and effects everyone in a bad way and the tapes show how the soldiers try to cope with whats going on witch will relativity affect Americans view on war.

Example of how others are affected.

Iraq War Song- I DON'T WANNA TALK ABOUT THE WAR- Listen in HQ for Best Sound!

In our point of view we feel that Patriotism is more based upon how dedicated one may be to his/ her country.

Consider: After reading the "the war tapes" & "How to tell a war story" we thought both O'Brien and Scranton had two totally different views upon the truth yet were quiet similar on how they would let their anger out. O'Brien states, "a war story is never really true but Scranton is telling us their true war stories that people don't want to believe it's the truth when it clearly is from handheld footage. 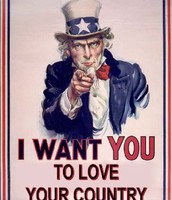 nathalia is using Smore newsletters to spread the word online.