Get email updates from Tania: 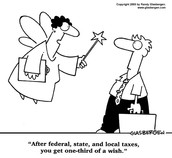 The Relationship between Occupations, Tax Bracket and Piecewise Functions

Federal income tax can be defined as a tax levied by the United States Internal Revenue Services on the annual earning of individuals, corporations, trusts and other legal entities. Due to the varying nature the occupations held by people who pay federal income taxes in the United States, the IRS created a rudimentary tax bracket in 1862 after recognizing that not all citizens earned the same level of income.

Method of Filing Taxes and the Survey

There are 4 status that one could claim in order to file their taxes. They are:

The photograph below shows the results of the survey my partner and I gave to 11 people in order to determine the most common way that adults whom my partner and I knew filed their taxes. In the survey my partner and I gave, we found that 2 out of the 11 people we surveyed filed their taxes under the category "Single". This category is applicable to unmarried divorced, legally separated or widowed as of the last day of the calendar year. Individuals who have dependents, but who are not the primary caregiver for more than half the year, must also use this filing status. The IRS generally requires taxpayers to file as "single" if they do not meet the criteria for the other filing statuses. If my partner and I were to file taxes at the current time, we would file them under this status. Therefore, we chose to use this status to find the pieces of the function which will be used to calculate the value of the taxes paid by people in different professions.

We used the above photograph of a tax bracket chart to come up with the pieces of the function for each bracket.

The Final Function and Graph

The tax bracket we used is from the Texas Department of Revenue website. It gave us a formula which we then used to derive the function for each portion of the tax bracket.

We chose the occupations of plumber, business analyst, software engineer and attorney because we wanted to exemplify the various ranges of the tax bracket. By using such a versatile range of incomes for out functions we were able to realistically depict the amount of taxes each occupation would potentially have to pay in this day and age. For example, when we plotted the point for the taxes paid for each of the occupations and saw that what the median income for someone with an undergraduate degree in science would pay roughly $2,500 in taxes. This information is applicable to people who are in high school as they will most likely be paying between $1,500 and $2,500 in taxes after college.

Meet Google Drive – One place for all your files

drive.google.com
Google Drive is a free way to keep your files backed up and easy to reach from any phone, tablet, or computer. Start with 15GB of Google storage – free.