How impaired vision affects the brain

How impaired vision affects the brain 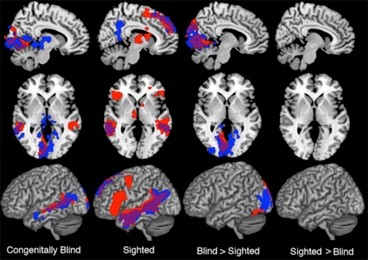 Blindness and the use of other senses

Some research suggests that in those who are blind the modules in the visual cortex that are used in spatial location are still utilized in a different manner- processing what they hear and touch (Georgetown University Medical Center, 2010). In the brains of those who are blind the touch and sound are also processed in the visual cortex as well as the other parts of the brain that are devoted to those senses, thus making these sensory abilities stronger and compensating for the vision impairment (Georgetown University Medical Center, 2010). Studies have also shown that when a blind person reads braille through touch the visual cortex is also activated (National Institute for Physiological Sciences, ND). 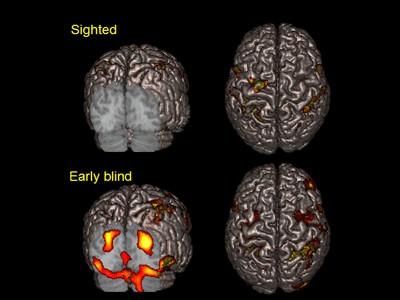 The above scans show the brain activity of a sighted person versus a blind person during the reading or braille (National Institute for Physiological Sciences, ND).

Below are two videos to help understand blindness, the brain, and other sensory functions

Parts of brain can switch functions