Know I little more than you already do!

Know I little more than you already do!

Reasons they leave there country are be cause of bad economy and not as good technology! Reasons they come to our country is whatever they have is better hear, we have more opportunities and jobs!

They don't follow these rules;- most migrants only travel short distances, each migration flow produces a movement in the opposite direction! 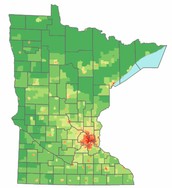 Location of most Vietnamese migrants!

They start off in rural areas and end up in urban as farmers!

Farming was a traditional thing they did in there home country and they continue it he in the United States!

When families move to the U.S. It sometimes causes problems between the parents and the children because the older vita names people stick to what they learned and the younger Vietnamese people start doing more American stuff and going for a bigger and better life!

They usually will try to come be farmers in rural areas because that's what they did in their home country but things don't work out and they move to more urban areas and become farmers in places like the twin cities!

Farming is difficult to them in M.N. because they had little land! The younger Vietnamese people usually quarrel with there parents because they try to go there own way in life by following more American traditions and personalities and the parents stick to there ways!