Tigger is using Smore newsletters to spread the word online.

Get email updates from Tigger:

Despite the common struggles of deforestation, natural disasters, and economy issues on the island of Hispaniola, the contrast between Haiti and the Dominican Republics success was mostly due to the political leadership.

Haiti and the Dominican Republic are two countries located on the same island known as Hispaniola. If you were to look at a world map it would be located right below and on the right of North America. Through the years Haiti and the Domincan Republic have gone in two completely different directions. The Dominican Republic has succeeded, while Haiti has gone into complete poverty with various problems. In Haiti the over population has gotten out of hand. There average to be more than 1000 people per square mile. Not only that but Haiti has had some tough leadership, which did not help the country in any means. The economy in Haiti is horrible. People are in poverty with no running water meaning the people can not shower or brush their teeth. Sanitation is not common. Their gdp is 7.84 billion dollars which is 7 million dollars less than the Dominican Republics gdp. The Dominican Republic was somewhat of the opposite of Haiti. The people were happy, and the economy was doing very well with all of their exports such as coffee, etc. They dealt with all of their problems such as deforestation with little to no problems. 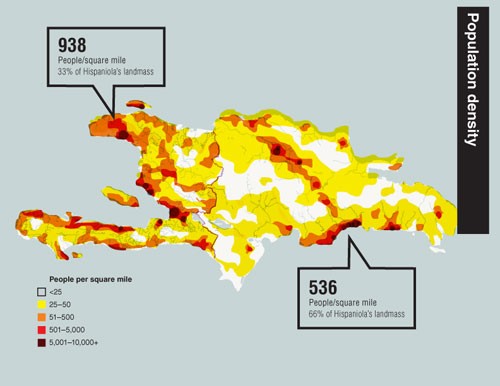 Between 1930 and 1961, Trujillo had complete control over the people in Haiti. He abhorred the people in his country. He did everything to tell people that it was a white nation. He hated all Haitians, Haitian immigrants, and Haitians of Dominican Dissent. One day he ordered all of his troops to kill Haitians in the North West of Haiti. Immediately when the Haitians heard that this was going to happen, they started to flee to the Dominican Republic across the Aritbonite River, known as massacre river. Shortly after the troops found out about this they blocked the border, permitting all access to the Dominican Republic. Throughout this whole process 15,000 Haitians died. Even though Trujillo did not secede to kill all of his country, he sure did make damage. By the end of Trujillo's rule he put Haiti in a very bad state. He did not care about industrializing or about the economy, nor did he want people to think of his people as who they were. On all of the pictures of people in Haiti it was white people modeling. He was hispanic himself, but still going for the whole white look. Sometimes he would even put white powder on his face to make it look like he was not hispanic. On that note, the Dominican Republics leaders have been much more helpful to the Dominican Republic. They have helped with their economy and making sure that the people enjoy living there. One example of a ruler in the Dominican Republic was Leonel Fernandez. He ruled from 2004 to 2012 . One of his main priorities was to stop all corruption and make the Dominican Republic a better place. By trying to make sure that most people got the proper pay, Leonel said that that would stop all illegal bribing. To increase the economy he tried to increase farming and agriculture, as well as the countries technology. One thing that both Dominican Republic leaders such as Leonel, and Trujillo did was make sure that they were known as a white country. On all of their flyers, or their people in pictures in magazine the rulers would make sure to have the models be white. The ironic part about the whole thing was that the leaders themselves were hispanic or black, not white. This meant that in pictures of themselves they would put on white makeup to make sure that everyone thought they were white.

The difference of the amount of damage done in the Earthquake of 2010 from Haiti to the Dominican Republic is incomparable. The Dominican Republic had little effects. They had to shut a few things down for a few days, but that was primarily it. On the other hand, it was the worst natural disaster to ever hit Haiti. The quake killed 200,000 to 250,000 people. The amount of money the damage costed was about 7.7 billion dollars. They estimate that there is 300,000 families homeless after this earthquake, ontop of that 600,000 families were living without a stable home before the quake averaging to about 900,000 families without homes.Ever since the quake, their economic situation has been 30% lower than what it was before. The united states had to come into Haiti to help, by giving Haiti 1% of their imports. Hanesbrands and Gap helped to import clothing for Haiti. 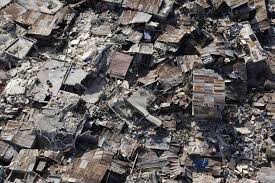 Economy of Haiti and the Dominican Republic

Haiti is known to be the poorest country in the Americas. Some people even believe that it is the poorest country in the western hemisphere. The agriculture and farming business did not do well because of the frequent natural disasters. Farming was also hard because of all of the deforestation. Only 2% of the land was forested in 2006. People in Haiti do not have enough money to build their homes back after the earthquake in 2010. Most of the rebuilding being done is from other countries help. On the contrary the Dominican Republics economy relied mostly on exporting goods and agriculture. They grow coffee, tobacco, cotton, cocoa, and rice. Not only that but they have mining of nickel, bauxite, gold, silver, and other minerals which help the growing economy. The free trade zones have increased industry in the Dominican Republic. Tourism is another important factor to the economy in the Dominican Republic, they're beaches are a destination for people. So as you can see the difference of economies from Haiti to the Dominican Republic is quite drast.

Tigger is using Smore newsletters to spread the word online.