An unusual moment in Oakdale's history came about when William K. Vanderbilt’s former Idle Hour Estate was bought by James B. Schafer. Schafer was a charismatic leader, who needed a home base for the cult he started: the Royal Fraternity of Master Metaphysicians (RFMM). Schafer renamed the Idle Hour estate "Peace Haven.”

This spiritual cult attempted to immortalize an infant girl, Baby Jean, who was fed special food and treated like a god. The estate was a country club retreat for the spiritually enlightened. A pool was installed behind the tennis courts. Visitors included socialites such as Cartier.

Join South Shore historian, Diane Holliday, to learn about Schafer, the cult, and what life was like at Peace Haven. 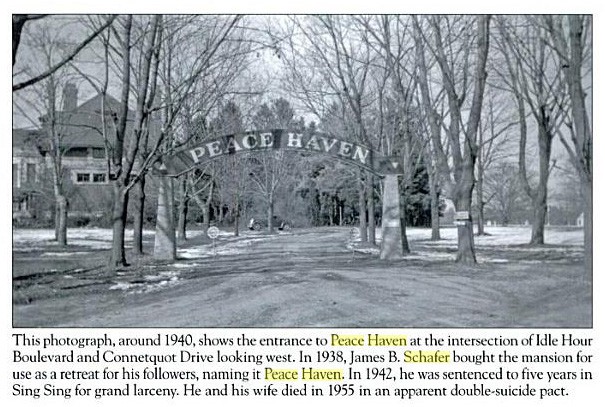 The BBP Library has a wonderful series of video files that feature prominent members of our hamlet sharing what life was like in Bayport Blue Point years ago. For some March Madness reflections check this out. Thanks to BHA members Mebby Banaszak and Dr. Kenneth Purdy for sharing. Enjoy!
Mebby Banaszak & Dr Kenneth Purdy 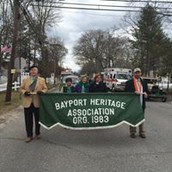 Save the date! On March 12th, 2017 at 11:00, The Bayport-Blue Point Chamber of Commerce will be sponsoring its annual St. Patrick's Day parade! Now in its 27th year, the Chamber Committee has selected Karl Auwaerter of Bayport Flower Houses as it's Grand Marshall for 2017!

All BHA members are encouraged to march in the parade to show their support of the Association and our community. If you would like to join us, please email Bbphistorical@gmail.com or call 631-472-4625 for more details. 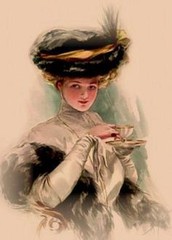 A chairperson is needed for the BHA's annual First Bloom Tea. It will be held on June 2nd, 2017 at 5:30 on the porch at the Meadow Croft estate. This event is open to members only. It will require minimal organization and time. Details to follow. If you are interested or would like more information, please email Bbphistorical@gmail.com or call 631-472-4625.

The BHA is in need of tour guides (docents) for the guided tours of historic Meadow Croft. It requires very little time, less than 2 hours a day. Tours are run only two days a month from June through October. You will shadow one of our current tour guides and learn the rich history and significance of Meadow Croft before leading your own tour. Support is provided each step of the way! Try something new and meet new friends! If you are interested please call Harriet Mihlstin at 631-472-2118.

Bayport: Once Home to Famous Artist

In the fall of 2016, The BHA held an antique car show. Among the visitors was Bayport resident, Tim Tomassini. Tim brought with him a lithograph he had bought in New York City. He knew the artist's name, Stow Wegenroth, but he was very interested to find out the exact location of the subject of the work- a beautiful old barn located somewhere in Bayport. We all admired the work, took Tim's name and number and said that we would try to locate the barn in town. Easier said than done. One day, while looking through some historical documents in our offices, I (John Amato) came across a file labeled "Wegenroth." I immediately made the connection to the artist's name on the lithograph from the car show. The file divulged everything needed to identify the barn in question and informed us about the artist, Stow Wegenroth, who is considered "the greatest black and white artist in America," according to Andrew Wyeth.

Stow was born in Brooklyn. He moved to Bayport with his family in the early 1900's. They lived at 92 South Ocean Ave. His father was an engineer for Grumman and his mother designed textiles. Stow was a gifted artist in drawing and watercolor at first. While attending art school in Manhattan, he developed an interest in lithography- a process of drawing on limestone slabs, applying chemicals and then ink to produce prints of the original drawing. Stow produced five pieces in which the subjects were located in Bayport. Mr. Tomasini owns one entitled, "Renascence." This is a barn located at the famous Pratt estate, Mr. Wegenroth's neighbor on South Ocean Ave. Several other barns were located on the Wegenroth property. The other prints from Bayport are entitled, Winter Lace, Early Summer and Summer Morning. Mr. Wegenroth's work received many awards locally and across the country. The Whitney Museum in NYC holds some of his work on display. Stow produced several hundred lithographs, many of New England scenes.

We were excited to offer Mr. Tomasini the information he was looking for about his artwork. What's more, we were more excited to rediscover this information about a local artistic treasure. You can learn more about Stow Wegenroth on the internet. He eventually moved to Rockport, Massachusetts where he passed away in 1978, but not before writing a letter to Laverne Whittlock, a former president of the BHA who researched this story in the 1980's and left the information for us. 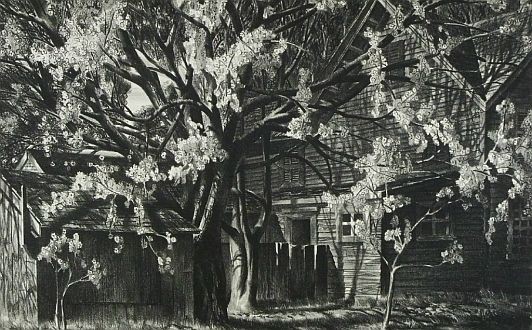 Election of directors of the Bayport Heritage Association

The BHA holds its annual election at the March general membership meeting. (See information above for details) Currently we are electing 3 directors to fill vacant seats. We would like to thank those directors who have served selflessly for the benefit of our organization and are now stepping down: Jill Hanson, Connie Smith and Joseph Novak. Thank you all for your hard work and tireless efforts. Our association has advanced because of your dedication to the local history of Bayport and our community. THANK YOU!!!!

Membership for 2017 is now due. The rates have not increased from last year:

Payment can be made by mailing a check to:

Please include your name, address, phone number and email address. You can also pay in person at our next General Membership meeting to be held at the Bayport BluePoint Library on March 4th, 2017 at 2:00. We hope to see you there!

Facebook @BayportHistory
Follow us on Facebook and now on Twitter!
Meadow Croft Estate, Middle Road, Sayville, NY, United States bbphistorical@gmail.com 631-472-4625 bayportheritage.blogspot.com
Embed code is for website/blog and not email. To embed your newsletter in a Mass Notification System, click HERE to see how or reach out to support@smore.com
close
Powered by Smore
Powered by Smore