How do morphology and phonology apply to language instruction? How do they meet the communication needs of ELLs?

Morphology is important for language instruction because teachers can make the meaning of certain morphemes, such as bound morphemes, explicit to English language learners (ELLs), which enables them to understand the meaning of new words that contain that morpheme. Bound morphemes are those that attach to other morphemes and cannot stand alone (Fromkin, Rodman, & Hyams, 2014, p. 40). Derivational morphemes are a category of bound morphemes that change the meaning of the word, such as in the case of prefixes and suffixes (Fromkin, Rodman, & Hyams, 2014, p. 44). Explicitly teaching prefixes and suffixes helps students to determine the meaning of words that they have never heard before. For example, we can teach our students that the prefix "un-" means "not" or "the opposite of". When they then encounter the word "unfair", even if they do not automatically know its meaning, they can figure out its meaning using the knowledge of the meanings of "un-" and "fair".

Another category of bound morphemes that would be useful for ELLs to learn about are inflectional morphemes. These morphemes do not change the meaning of words, but serve a grammatical function, such as the ending "-s" which indicates a plural number (Fromkin, Rodman, & Hyams, 2014, p. 46). Learning inflectional morphemes gives ELLs more flexibility in their ability to use the language, because they can properly express themselves in terms of tense, number, person, and other grammatical aspects.

Overall, morphology relates to language instruction as it makes the rules for word formation more explicit to ELLs. This in turn enables them to learn the meaning of new words using its morphemes, as well as allows them to correctly form new words. They are then better able to communicate because they can understand and produce novel words. 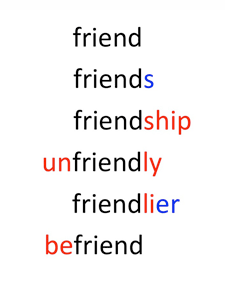 The picture above illustrates an example of how adding derivational morphemes to a word can change its meaning. In this example, "friend" is a free morpheme that can stand alone. The prefixes and suffixes change the meaning. In addition, the inflectional morpheme "-s" changes the number to more than one friend. The agentive morpheme "-er" means more, changing the meaning to more friendly.

Phonology is the study of the sounds of language, and how they combine in order to form patterns (Fromkin, Rodman, & Hyams, 2014, p. 224). Speakers of a language are able to recognize sounds that belong to their language, recognize sounds that do not belong to their language, and know what combinations of sounds could form words and which could not (Fromkin, Rodman, & Hyams, 2014, p. 225).

Phonology relates to language instruction because without understanding the sounds of a language, ELLs cannot recognize words and cannot form new words. They also will have a difficult time learning to read, as they will not be able to recognize spelling patterns that represent different sounds.

Teachers can make this knowledge explicit to ELLs by illustrating some of the rules of phonology. One rule that would be useful for ELLs is the rule for pronouncing plurals. Plurals are pronounced differently in different contexts (Fromkin, Rodman, & Hyams, 2014, p. 225). The endings "-s" and "-es" are added to words to form plurals depending on the pronunciation of the last sound in the original word. Some words change form completely and are irregular plurals, which must be memorized. However, even the regular endings of "-s" and "-es" do not have a standard pronunciation. There are three allomorphs for plural endings, so plurals can end with the [z], [s], or [ez] sound, depending on the situation (Fromkin, Rodman, & Hyams, 2014, p. 227). Illustrating this pattern to ELLs enables them to recognize and use the pattern of pronunciation in new plural words.

Another helpful strategy is to teach common spelling patterns. English has many different spelling patterns that often are pronounced the same. When students are able to recognize these spelling patterns, they will be able to more easily decode words with those spelling patterns, thus increasing their reading proficiency in English. Teachers can also show students how words are related by teaching them onsets and rimes. The onset of a word is the beginning of a word, and the rime is the rest of the word, including the vowel (Fromkin, Rodman, & Hyams, 2014, p. 252). Words can be related both in spelling and pronunciation by their rimes; only the onset changes. For example, cat, bat, and sat all have the same rime "-at", but have different onsets - "c", "b", and "s". If students can recognize and pronounce the sound patterns in one of those words, they can apply that knowledge to all other words in that word family.

In conclusion, phonology relates to language instruction as it helps ELLs to recognize English sounds, combine them in order to form words, and recognize words through their sounds in both oral and written language. Phonology increases ELLs' ability to communicate by helping them to decode written words in reading, spell new words in writing, and increase their oral language.