The space race is a battle for space exploration. It lasted form 1957 to 1975. It was between the U.S and USSR. They wanted to show supremacy by making it to the moon before the other. It took a while with small steps but eventually we landed on the moon.

Importance Of The Space Race

The Space Race was between the Soviet Union and the United States. It was also Important to the U.S, because it brought an end to the Cold War. It was a race to decide which system worked better, Capitalism or Communism, they also realized how important rockets would be to their military if they won the race.

1957 It started when Sputnik went in to orbit. After that, they sent up sputnik 2. It carried a small dog. 1958 Explorer 1, the first american satellite to reach orbit, is launched. Then we sent up explorer 2 but it failed to reach orbit. Then we sent up the Vanguard 1 satellite is launched. It worked for 3 years. Then they sent up sputnik 3. 1959 Luna 1 was launched by the USSR. It is the first man made object to orbit the Sun. We launched Pioneer 4 on a Earth-Moon Trajectory. It passed within 37,000 miles of the Moon before falling into a solar orbit. The "Mercury Seven" astronauts are selected by NASA. The Soviet Union launched Luna 2. It impacts the Moon on September 13, becoming the first man-made object to do so. Luna 3 orbits the Moon and photographs 70% of its surface. Tiros 1, the first successful weather satellite , is launched. The US launches Discoverer XIV, its first camera equipped spy satellite . John F. Kennedy is elected the 35th President of the United States. Yuri Gagarin orbits the Earth once and becomes the first man in space. Alan B. Shepard becomes the first American in space. President John F. Kennedy addresses Congress and challenges the nation to go to the Moon before the end of decade. Gus Grissom is launched on a sub-orbital-flight. His Liberty-Bell capsule is lost when it fills with water and sinks after splashdown 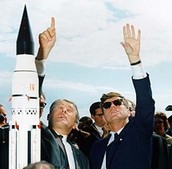 www.ducksters.com
Kids learn the history of the Space Race during the Cold War. A race between the United States and the Soviet Union to put a man on the Moon.