Get email updates from kaitlyn:

The main things of the American Revolution

The restriction of Boundaries (proclamation of 1763)

From the Proclamation intended to reduce conflict with Native Americans. However , colonists saw this as another attempt to Reinforce British Control. 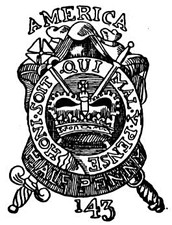 People began to place taxes on almost everything.

Such as , printed materials , playing cards , and legal documents.

It affected almost everyone in the colonies and also made people finally realize it was time for a change.

The Boston tea party was an act of civil disobedience armed out by the patriots know as the sons of liberty on December 16th 1773. It was also known as the tea act because they boarded up the ship and threw all the tea out of the ship because the prices for the tea were unfair. And if they went somewhere else they could of gotten better.

During the wee hours of April 19, 1775, he would send out regiments of British soldiers quartered in Boston. Their destinations were LEXINGTON, where they would capture Colonial leaders Sam Adams and John Hancock, then CONCORD, where they would seize gunpowder. 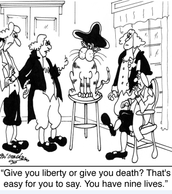 "Give me liberty of give me death" is a quotation attributed to Patrick Henry from a speech he made to the Virginia Convection in 1775, at

St. John's Church in Richmond, Virginia, he is credited with having swung the balance in convincing the Virginia House of Burgesses to pass a resolution delivering the Virginia troops to the Revolutionary War Among the delegates to the convention were future U.S. Presidents Thomas Jefferson and George Washington.

The American Revolution in 5 minutes!