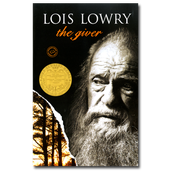 In the book The Giver by Lois Lowry explains how a boy named Jonas attempts to save his community and the secrets that have been held from the community. Jonas all his life knew he was different from the others in his communty, but he never really thought much of it until he was chosen to be "The Reciever of Memory." Even though the book was very well written, there were some minor differences when they transformed it into a movie.

In the book and movie there were many differences and similarities here are a couple simularities. One simularity is how the community was put together. What I am referring to is how the community was very blank and the people there have very strict rules to follow. Another simularity is when Jonas watches his dad release the baby. "He killed it! My father killed it! Jonas said to himself,"(Lowry 150). This evidence shows how shocked Jonas was when he figured out his dad had just killed an innocent baby. This really bothered Jonas because he found out that his dad had been lying to him on what he was doing at his job, but now Jonas knew.

While there were many simularities there were also some differences too. One difference is the way Jonas recieved his memories. In the book Jonas recieved his memories when the GIver would place his hands on Jonas's bare back. "I am going to transmit the memory of snow, the old man said, and placed his hands on Jonas's bare back." (Lowry 79). This shows how Jonas recieved his memories in the the book. In the movie it was slightly different. When the Giver wanted Jonas to recieve a memory the two of them would grasp each others wrists and both close their eyes. While the two were different they both had the same purpose. The second difference was where Fiona was chosen to work. While in the book Fiona was chose to work with the elderly, in the book she took care of the newborns. In the book Fiona had nothing to do with Jonas's and Gabe's escape, but in movie Fiona helped Gabe and Jonas escape. This all was due to where Fiona was working.

In the book The Giver the sled stands for a variety of things, here are a couple. First I believe it shows hope because when jonas was trying to get him and gabe to safety they got to the top of a big hill and at the top of the hill there was the sled and it gave them hope again. Another thing is accomplishment, because when they find the sled they knew that they had just found what they need to finish the trip.

When push comes to shove, shove!

Lois Lowry shows dramatic irony when she said "Jonas stared at the screen, waiting for something to happen. But nothing did. The twin lay motionless" (Lowry 150). This shows dramatic irony because as readers we know that the baby is dead but Jonas has no clue and is waiting for the baby to move. This makes us feel sad for Jonas because he has no idea that the baby has died and is not moving. When Jonas realizes that the baby has died, he builds anger towards his dad because he has always lied to him on what he does in his job.