Aurelia is using Smore newsletters to spread the word online.

Get email updates from Aurelia:

Martisors are small tokens of friendship or love given on the Martisor holiday. Traditionally, martisors have been given by men to the women in their lives, who then wear the martisor pinned to their blouses. But March 1st in Romania and Moldova is not just about love, and martisors have meaning that, some believe, can be traced back thousands of years. In the past, martisors were made with black and white threads to signify the opposing forces of the world: good and evil, life and death, darkness and light. This tradition persists in some regions, though it has largely been replaced with the colors of love. Today, martisors are made with red and white threads. The red color symbolizes blood and womanhood and the white color represents the male spirit and snow, their combination meaningful for relationships.

Martisors may be nothing but twisted or woven threads, but often a small medallion or coin is attached, giving the amulet individual character. In some cases, the medallion or decorative part of the martisor may eclipse the red-and-white threads that are integral to the piece. This medallion can take the form of a blossom, a shell, a ladybug, a heart, or any other shape the maker prefers.

Wearing the Martisor Traditionally, martisors are worn for a specific period of time. In some regions, they are worn for the first 12 days of March; in others, the wearer keeps them until the end of March or the first sign of spring. Like the martenitsa tradition of Bulgaria, martisors, once worn, may be transferred to a blossoming tree as a way of acknowledging the onset of spring. 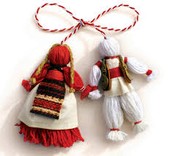 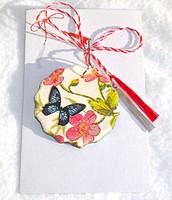 The day of March 1, according to the old calendar, was considered the beginning of the New Year, the celebration of Spring’s arrival. Martisor is an over 8000 years old tradition, born in the lands where now Romania is. In the time of the Dacians (Romanian ancestors), spring symbols were made during winter and were worn starting with March 1st. Martisor were then white and red pebbles, strung on a string and worn around one’s neck. The red color, given by fire, blood and sun, was attributed to life, hence to women. White, on the other hand, conferred by the clarity of water, the white of the clouds, was specific to the wisdom of men. Besides, the cord of the Martisor expresses the inseparable interweaving of the two principle as a permanent movement of matter. It signifies the exchange of vital forces that give rise to life, the continuous cycle of nature.

The significance of Martisor remained the same over time: it’s a symbol of spring, of the returning to life. It brings optimism and faith. Back then, Martisor was attached to a rose or a blossoming tree, to bring luck, or was thrown in the direction from which wandering birds came, saying “Ia-mi negretele si da-mi albetele” (Take me the black and bring me the white” – meaning take away the surrow and everything negative and exchange it to happiness and good things).

Aurelia is using Smore newsletters to spread the word online.

Follow Aurelia Berusca
Contact Aurelia Berusca
Embed code is for website/blog and not email. To embed your newsletter in a Mass Notification System, click HERE to see how or reach out to support@smore.com
close