Get email updates from breanna:

The Nuremberg laws took the Jews German citizenship, kept the Jewish from having a German maids under the age of 45, and kept any non Jewish German from marring or having any relationship with a Jew. Any marriages the happened before the laws were placed were considered "privileged mixed marriages" and help some in keeping the Jewish spouse safe. due to the fear that labeling half Jews as Jews would make them lose a lot of their army, Hitler avoided making the decision that half Jews would be considered Jews, so that he wouldn't lose a large portion of his army. 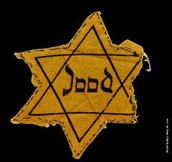 Jews were forced to wear the yellow star of David in order to separate them from the Aryan's men and women, in other words, Germans.

This was used as a map or sorts to determine if a person was a Jew or German.

Jews businesses taken over or destroyed

Jews were forced to give non Jews ownership of their business, or the business was robbed of anything valuable and then destroyed.

links to more info on the Nuremberg laws

Describes the Nuremberg laws and what rights were taken from the Jews because of them.

How the Nuremberg laws were passed, what they did, and why some people were considered to be half Jews.

Nazi Germany - The Nuremberg Laws - Hitler and the Jews N03d

About the Nuremberg laws

During the annual party rally that took place in Nuremberg in 1935, the Nazis informed the people about the Nuremberg laws. The laws kept Jews from German citizenship and denied them the right to marry or have any personal relationships with people of "German or related blood." The Nuremberg laws though, did not define Judaism as a religion, but as a race. Anyone who had three or four Jewish grandparents were considered a Jew, no matter if that person practiced Judaism or not. Germans who had not practiced Judaism in years were still outcast and punished the same as every other Jew. Even people with Jewish grandparents who were now Christians were considered Jews.

Nuremberg Law for the Protection of German Blood and German Honor. 14 December 2001. 25