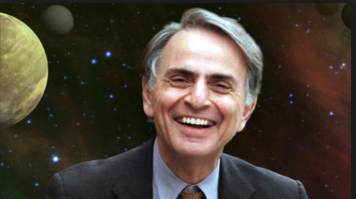 He contributed to STEM in his work and research. His work was mainly in astronomy, much of it with NASA.

He earned a PhD in physics, and spent his entire career doing research and writing about stars and planets. He was the first to hypothesize that Venus was a hot wasteland due to its greenhouse gases. This was later proven when NASA sent craft to Venus to explore its surface. Sagan also worked closely with NASA on the Apollo missions and he even briefed the astronauts before they were sent into space. In addition to his work with NASA, he did a great deal of research and writing about the possibility of extraterrestrial life. He was a prolific writer with more than 600 papers published along with being the co-author or editor of more than 20 books. He was also a television personality. As the host of the PBS science show "Cosmos," Sagan reached out to people on a regular basis, explaining the mysteries of science and the universe.

Impact on STEM and Cyber

He was a great ambassador for the field of STEM by helping the public understand some of the great cosmic mysteries. He was the inspiration for many young children to become scientists, including the current host of the new show "Cosmos," Neil deGrass Tyson.

Going to the 1939 World's Fair in New York and seeing the exhibits there were the catalyst for him going into science.

Sagan won a Pulitzer Prize for his book The Dragons of Eden.