Joelle is using Smore newsletters to spread the word online.

Get email updates from Joelle:

Geography at the movies

Geography at the movies

An Earthquake is a sudden violent shaking of the ground. Most earthquakes occur along the fault lines when the plates slide past each other or collide against each other. 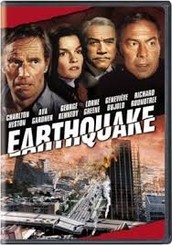 Hollywood disaster movies are a popular genre of film. This poster will explore the realism of the scenes shown in the film earthquake. Which was produced by Charlton Heston in 1974.

The location where this type of hazard usually occurs along the edge of the oceanic and continental plates.

The map below shows the normal location of this type of hazard.

In the film the hazard was shown to be occurring in Los Angeles. This is an inaccurate location for this type of hazard because the tectonic plates move past each other instead of moving on top of each other in California. 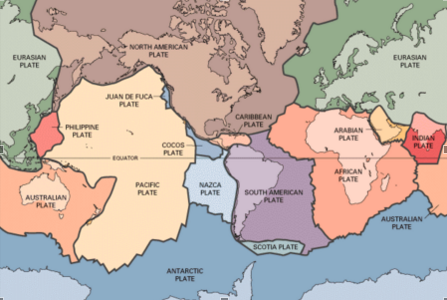 How do Earthquakes Work?

The earthquake hazard is caused by a number of processes.

One of the most important processes to cause this hazard is the movement of the tectonic plates.

The diagram below shows how this process works.

The earth's outer crust is held in place with rough edges and lines. The energy stored here causes the pieces to slide, glide, knock and move around each piece. After a period of time, the energy and the intense pressure causes the fault lines to give way, the plates then move over, against or apart from each other.

This hazard normally produces effects such as ground shaking, people dying, getting injured or homes can be destroyed. 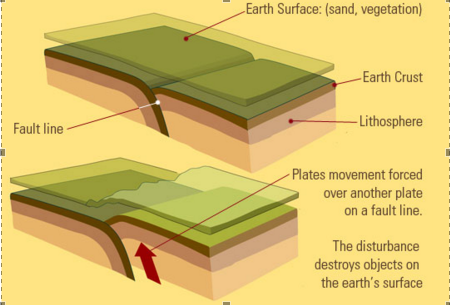 These are the 3 different kinds of Plate Boundaries. The 1906 San Fransisco earthquake was on a transform plate boundary.

When 2 plates slide past each other, it is called a transform plate boundary. Natural or man-made structures that cross a transform boundary split into pieces and are carried in opposite directions. No magma is formed.

When 2 plates come together, it is called a Convergent Boundary. The impact of the 2 colliding plates touches the edge of one of both plates. A chain of volcanoes often forms parallel to the boundary, to the mountain range and to the trench.

A divergent boundary occurs when 2 tectonic plates move away from each other. Beneath the rift, magma rises from the mantle. It oozes up into the gap and hardens into a solid rock while it forms a new crust on the torn edges of the plates. 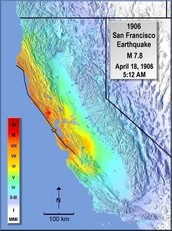 One real example of a hazard which has shown this is the San Fransisco Earthquake.

The event saw effects as there were over 3000 deaths and over 80% of San Francisco was destroyed.

The hazard was different to other earthquake events as the earthquake resulted as a fire. It is also remembered as one of the worst natural disasters in the history of the United States.

I have triangulated this information.

On a scale of 1-10, I would rate this a 7 because the fire in the movie comes out from a house, which contains electrical chords. However, this scene only showed fire breaking out of one's house and the San Fransisco earthquake has it spread around the country.

How does the film differ from reality?

The film clip is similar to real life hazards in a number of ways.

The event during the clip at 0.52 seconds into clip showed that people were in fear and they were trying to escape. This is typical because people do try to run away and many freeze into fear during an earthquake.

Another expected aspect of the film that occurs in reality is that cell phones are shown to not work after the earthquake, with non-powered landlines remaining operational. Texting may work even better.

There are also some less realistic aspects of the film for example when people get hurt because of collapsing buildings during 1.38-1.40 seconds into the clip.

This is an unexpected effect because people don’t actually get hurt by falling buildings. Instead, they would usually get injured (or die) from falling objects such as furniture, TV etc.

In conclusion most of the clips shown in the film are realistic as most of the moments can be related to a real life event. The reactions of people in the movie are fairly realistic as some run while others are frozen in fear, yet some help others. The movie also demonstrates that people know how to “Drop, Cover, and Hold On”, check for injuries and having a backup plan. These are all some very useful knowledge during and after a real earthquake. However there were also some unrealistic points about the movie such as the faults do not split apart during the earthquakes and the San Andreas fault is not long and deep enough to have a magnitude 9 or larger earthquake as it was shown in the movie. Also, the film could have decreased the amount of exaggeration as with the grounds cracking and people falling out of the building. Instead, the movie should have shot scenes where people get injured (or die) during an earthquake from falling objects (furniture, TV etc.) than by collapsing buildings.

Overall, I would rate this a level 7 as 60% of the scenes are quite realistic however some scenes are over exaggerated.

Joelle is using Smore newsletters to spread the word online.