Humans migrate for many different reasons, they migrate for better opportunities or to expand their occupation/career. Others migrate because they need to get away from where they don't want to be. (For their better) Normally people won't migrate within the same state or closer states around. People normally will migrate to a different country. People will even illegally migrate from their countries where things aren't going well for them to places like America. In the winter some older people will move down near/around florida to get away from the cold in the winter, which is also migration. But people will move all around to better their life.

When you think of a regular mosaic, you think of a big picture made out of different little pictures creating the whole. Humans create cultural mosaics by the different social groups they can be apart of. For example; In class, we did that real life simulation of Guatemala, and we all were apart of a different social group, and by us doing that we each created a section of a whole cultural mosaic. And obviously as human beings we all originated from different places all over the world, and for that to happen out families had to have come from places all over the world to create us! So we are able to look at ourselves as cultural mosaics because the places our families originated from is now in our blood! 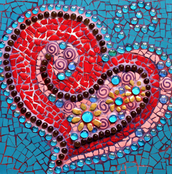 When balancing power of cooper and conflict among different social groups it can depend whose in charge when there is cooperation or conflict. Normally the U.S. is always able to take over (which happened in our simulation game) Which made the U.S. and army/wealthy cooperate well together, but then the guerrillas and peasants where against them. So it really depends on who is in charge.

In the real world humans migrate literally everywhere all the time. If humans illegally migrate it is normally done by foot, but normally if its its to different countries people can just travel by plane. Yes in my analysis I did mention that people normally migrate to better their opportunities and that is true along with the fact that some people don't like where they live, and they don't like the way their country is run.

The way humans create cultural mosaics in the real world is by social groups (Guerrillas, army/wealthy, peasants, U.S., etc.). They all can be seen as the parts of a cultural mosaic because they make the whole.

In the real world, none of the social groups will ever get along and cooperate. Because there is always going to be the group in charge that has problems with the other groups causing problems between all the groups except maybe 2.

Power can shift between the different social groups because what ever group has the most MSU's can be in charge. The way to try to obtain more MUS's is by making alliances with the other social groups by trying to offer them stuff they might want, and by becoming an alliance with that group you will be able to share the power, which is not what many people want, so that another reason there can be plenty of conflict. Which will upset and or confuse other groups causing the positive and negative reactions. An easier way to think of this power shifting between your family as everyone grows older.

How my Life connects too:

In my life I can create to humans migrating because during the winter time my grandparents move down to florida and we will always visit them to get away from the cold.

My life connects to cultural mosaics because my families have originated form Italy and Ireland, but before that of course there were plenty of different places they were from causing me to be a whole made up of different cultures.

Humans balance the forces and cooperation and conflict:

I am able to connect to this because in my family, (which can relate to a social group) we always get in conflicts and try to work it out but it doesn't always work, so we need to balance out or ideas and see what we can do to make everything right.

I was a guerrilla during bullets and ballots and we were for communism and we tried to make an alliance with the U.S. and the peasants offering them peace basically just to obtain their MSU's.

In the beginning, the army/wealthy had all the power because they had the most MSU's but then we obtained to peasants (which gave us 60 MSU's) and then the U.S.'s MSU's as well leaving us with the power. But in the end, the U.S. was able to take over everyone and everything.