We are meeting our friends again after a month

We are meeting our friends again after a month

Program of the visit

Programme for Catalan and Polish students

8.00 pm - Catalan students will be collected from the Modlin Airport.

8.00 am - meeting at school, quick presentation of what we’re going to see in Warsaw

9.00 am - leaving for Warsaw (Teens will be divided into groups and they will take part in location-based game, they will be given instructions what to do and where to go, each group will be accompanied by a teacher)

Free time for souvenirs on the Old Town square

Free time with the families

1pm – 5pm - lunch at Żabieniec (Spalona) I hope the weather will be good (you never know) we want to organise barbeque with sausages and food brought by the families. After lunch games.

In the evening pack your bags please

8.30 am - meeting at school – we want you to take part in Foreign Languages Day – event which takes place every year in our school

5pm leaving for the airport

Getting to know the history a little

Polish students showed Catalan guests a presentation about Warsaw history, pointing out the similarities between our two nations

City game - getting to know Warsaw

Students were divided into 3 groups and together with the teachers they were looking for the landmarks.This is the example of where one of the groups went

Followthe instructions of the game and take lots of photos!

The game starts in the underground station called „Nowy Świat”.

1. The Monument of Copernicus

Take a photo with a famous Pole who caused the Sun to cease and moved the Earth.

Going along Krakowskie Przedmieście Street on the right you’ll pass the monument of the bending person – that’s Polish writer Bolesław Prus. Going further find the building where in front of it there is a horse rider – that’s the Great Prince Józef Poniatowski. The Head of State lives in this building. Take your photo with the Presidential Palace at the background. Going further you’ll also see the monument of Polish writer Adam Mickiewicz. Take a photo with the monument.

5. The Column of King Sigmund

Opposite the Column of King Sigmund there is the Royal Castle, which was a home in previous times to Polish kings. Today it’s a museum with beautiful rooms and paintings inside.

When you look carefully at the Royal Castle, please turn around and look at the beautiful old tenement houses. Find Świętojańska Street and go along it. On the right you’ll find Warsaw Archcathedral where graves of famous Polish writers and politicians are placed inside. Go further and find the Old Town. Have a look at the tenement houses there. Maybe you’ll find sundials on some of them. In the middle of the Old Town there is a monument which is a symbol of Warsaw. Take a photo of it.

Go back to the Old Town Market and find Nowomiejska Street. Go along the street until you’ll see the remaining parts of the wall. When you’ll pass by Barbakan, turn left to Podwale Street and go along the street. On the left you’ll see the monument of a small child in a soldier’s helmet. This is the Monument of the Little Insurgent that was placed here to commemorate scouts, young Varsovians who fought during World War II in the Warsaw Uprising in 1944. They died in dignity, sacrificing their life in a battle against the German occupant.

10. The Monument of Warsaw Uprising

Opposite the Little Insurgent Monument J.Kilińskiego Street begins. Go straight the street to the end of it and turn left to Długa Street. Go in the direction of a crossroads. On the left you’ll pass by the garrison church where all military ceremonies take place. Go inside the church and take a photo of the interior of it. Opposite the church there is a huge magnificent monument dedicated to all heroes of Warsaw Uprising, who were fighting in 1944 for freedom in occupated Warsaw. Take a photo with the monument and later on look at the old building of the National Library. This is the last place you have to take a photo of.

11. St. Anna’s Church – Go along Miodowa Street until you’ll see a church with a tower. This is a famous ST. Anna’s Church. You’ll have to the Old Town. To get there you have to go along Kapitulna Street and then go along Piekarska Street. In the Old Town in front of you you’ll see the restaurant called ‘Bazyliszek’. Wait for the other groups in front of the building – we are having dinner there at 1pm. 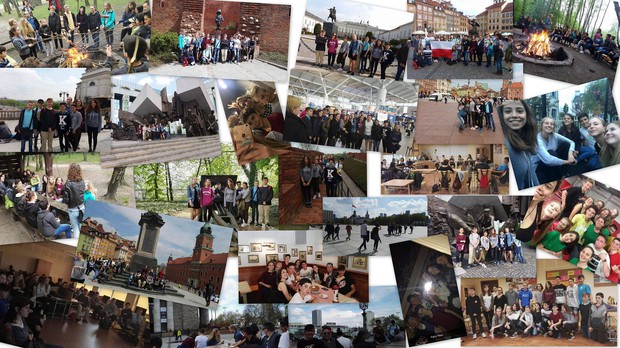 Follow Joanna Kuligowska
Contact Joanna Kuligowska
Embed code is for website/blog and not email. To embed your newsletter in a Mass Notification System, click HERE to see how or reach out to support@smore.com
close