Get email updates from adrianna:

Monkeys have arms, legs, and thumbs that can move easily. They also possess flexible arms and legs which are used for grasping and climbing. Their lifespan differs with the species for instance, the squirrel monkeys can live up to 20 years. 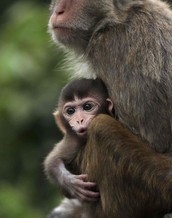 How was it born? How does the mother care for it’s young?

Like human beings, monkeys are mammals and therefore give birth to live children. Although most females deliver only one baby at a time, some species are capable of having up to four children at once. A female monkey usually becomes pregnant when she is around 3 to 5 years old.For the most part, the mother actually gives birth by herself and usually does not require very much recovery time. A mother monkey’s attention and care during her child’s infancy has a significant impact on the young monkey’s emotional development.A lack of love from mother and peers during infancy has an even greater effect later in life. In one study, three-year-old rhesus monkeys that were isolated during their first year of life showed much more aggression toward unknown monkeys than did their peers.

How does it get its food? What does it eat?

Monkeys eat almost anything from trees such as leaves, fruit, flowers, insects, seeds, hawk and sometimes other monkeys. they get their food by swinging through trees and finding it. they get it from trees in the areas in which they live in.

Where does it live, and what are some of its habits?

Monkeys live in warmer areas of the world such as Africa, Asia and South America. They mostly spend their lives in trees and have a prehensile tail that acts as an extra limb. Most kinds of monkeys have only one offspring at a birth. Another habit of a monkey is most of them only feed during the day.

Who are it’s enemies, and how does it defend itself?

The Hyena, various large cats that live in the same areas, and other primates such as the chimpanzee may consume some species of other monkeys as well.