How are hurricanes formed?

Hurricanes don't start out as hurricanes, they start out as tropical storms. When a tropical storm is over water 80 degrees or warmer, it starts to collect vapor and this water vapor starts to spiral up clockwise into a large cloud. This cloud will continue to spiral, grow and strengthen as long as it stays above water that is at least 80 degrees fahrenheit. This happens because hurricanes are low pressure and feed off of warm water.Once the tropical storm's winds reach a speed of 75 miles an hour it is catagorized as a hurricane. Hurricanes can have a 600 mile diameter and wind speeds over 155 miles per hour! These mighty hurricanes are most likely to form, in the Atlantic, from June 1st to November 30th. This Is called, hurricane season.

What are the classifications of hurricanes? 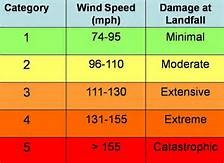 What are the strongest and weakest parts of a hurricane?

Hurricanes have three parts.The outer most parts are called the rain bands, these rain bands are what make the hurricane have a spiraling appearance. They have medium to heavy rain inside them. The second part is the eye wall, which is the most powerful part of the hurricane. It has the heaviest rains and the most powerful winds. The eye wall can be five to fifteen miles wide. The center of the hurricane is the eye. The eye is 20 to 30 miles wide. The eye has slow to no wind and clear skies. The eye of a hurricane can sometimes produce tornadoes. 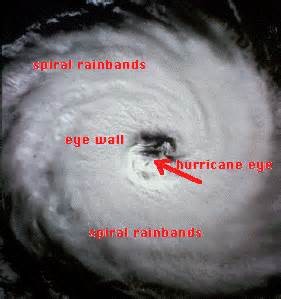 How do scientists predict and track hurricanes?

Scientists can predict and track hurricanes in many ways. For example, they can use weather balloons to measure windspeed. They send the balloons up, and after a certain amount of time, they determine how far the balloon has traveled. They then make calculations from the information they get from the balloons, which gives them the speed. They also use radar and satellites to track where the hurricane is. With their observations they can accurately predict when and where a hurricane will strike. Although we now have the ability to predict and track hurricanes, this has not always been the case. At one point in history,the lack of these instruments cost a city thousands of lives.

The storm of 1900 was a hurricane that shook the unprepared city of Galveston, Texas. It was the largest and strongest storm to hit the coast of the United States ever! The week started with beautiful weather, not a cloud in the sky. Galveston residents could be found enjoying the sun and cool water with family and friends. Little did they know their lives and city were about to change forever. The first report of hurricane conditions in Galveston was at 5:15 a.m. on September 8, 1900. As a result of Galvestonians ignoring the warnings, the storm caused an estimated 9,000 deaths, and many more people were wounded. This storm was a game changer. Scientists and engineers raced to get prepared for the next hurricane. They didn't know when it might happen again, but they did know that they didn't want the same outcome.

These swift, deadly and rapid moving waters can sweep you off your feet in a split second. One minute your wading across the street to reach the other side, and the next you are 100 yards downstream, struggling to keep your head above the vicious waters. During the Storm of 1900, currents caused the deaths of hundreds. Currents took houses, cars and people away; some never to be seen again.

Storm surges are when the ocean rises higher than usual and floods a city or town from the ocean. The huge floods reach depths of twenty feet and stretch one hundred miles. During the Storm of 1900 men, woman and children had to climb to the roofs of their houses just to escape being swept away by the mighty currents created by the storm surges.

The heavy winds of the Storm of 1900 were estimated to reach 160 miles per hour! Winds this strong can cause devastation to a house if it isn't sturdy enough. They also tore off the shingles of roofs and swung them at innocent people in the streets searching for loved ones.

How are scientists going to prevent this from happining again in Galveston?

Everyone will agree that this was the most destructive disaster to ever hit Galveston. Scientists would like to keep it that way. To prevent this from happening again, Galveston was raised 13 feet (at the highest point). This was done by taking out sand from the bay. This lowered the chance of flooding because of the new depth of the bay. The construction of the Seawall also helped prevent flooding. When it was finished, this massive structure stood 17 feet tall and was 15 feet thick. Its purpose was to keep the storm surges from reaching the city of Galveston. 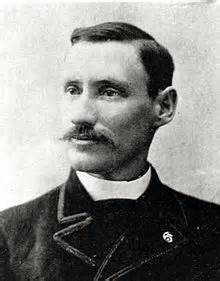 Who was Isaac Monroe Cline and what was his role in the 1900 storm?

Isaac Cline was a meteorologist in Galveston during the storm. Cline knew about the storm before anyone else did, but instead of fleeing as fast as he could out of Galveston, he stayed back. He rode along the beach on a horse and warned people to leave while they could. Not many people listened to him, but those who did were very grateful they did. Although he didn't save many people, he will always be remembered for his bravery. 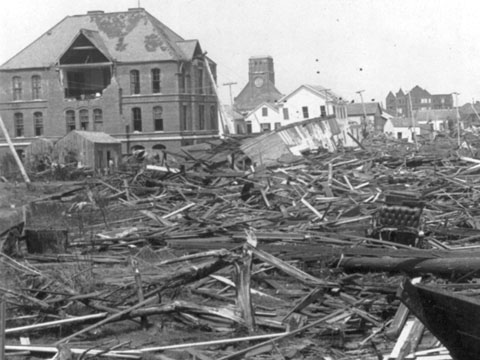