Christmas In The Netherlands!

Christmas In The Netherlands!

In the Netherlands a guy named Sinterkless brings the children gifts in their shoes insted of stockings!!

They have a special ceremony were they blow horns that blow out sprits! They also are banned from Christmas tress so they have to put up a New Year's tree.

The people in the Netherlands really like to decorate. This is a picture of their decorations at night! 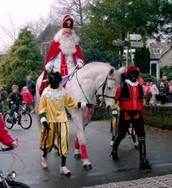 This is the Netherlands Santa! He rides on a horse instead of a sleigh.

The inside of a building that they decorated!