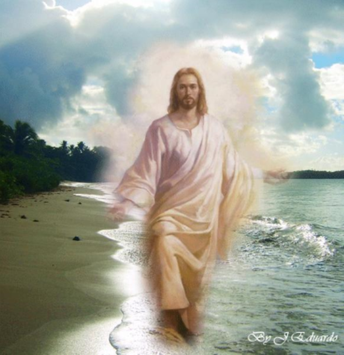 A Word From the Pastor

1 The prophecy that Habakkuk the prophet received.

2 How long, Lord, must I call for help, but you do not listen? Or cry out to you, “Violence!” but you do not save? 3 Why do you make me look at injustice? Why do you tolerate wrongdoing? Destruction and violence are before me; there is strife, and conflict abounds. 4 Therefore the law is paralyzed, and justice never prevails. The wicked hem in the righteous, so that justice is perverted.

5 “Look at the nations and watch— and be utterly amazed. For I am going to do something in your days that you would not believe, even if you were told. 6 I am raising up the Babylonians,[a] that ruthless and impetuous people, who sweep across the whole earth to seize dwellings not their own. 7 They are a feared and dreaded people; they are a law to themselves and promote their own honor. (Habakkuk 1:1-7)10 They mock kings and scoff at rulers. They laugh at all fortified cities; by building earthen ramps they capture them. 11 Then they sweep past like the wind and go on—guilty people, whose own strength is their god.”

12 Lord, are you not from everlasting? My God, my Holy One, you[a] will never die. You, Lord, have appointed them to execute judgment; you, my Rock, have ordained them to punish. 13 Your eyes are too pure to look on evil; you cannot tolerate wrongdoing. Why then do you tolerate the treacherous? Why are you silent while the wicked swallow up those more righteous than themselves?

In the Scripture above, the prophet Habakkuk was upset with God. He was crying out to God for help amidst the violence in his nation, but God did not seem to be responding to his pleas. He was losing his patience with the LORD (1). Second, he wanted the LORD to intervene into his nation’s chaos and conflict and violence (2)! Injustice was the theme of his day (3)! The law was paralyzed; it was broken. It wasn’t functioning (4). The tables had been reversed, because the wicked hemmed in the righteous, so that justice was perverted (4).

Our nation has been experiencing some of these very things. Police are called to an altercation. They shoot and injure, or kill, a person of color. Instead of waiting for the judicial system to determine if there should be charges and to rule, mayhem breaks out in the streets. Stores are broken into and looted that had nothing to do with the initial incident. Sometimes buildings are set ablaze. People, including law enforcement, are injured. In some of these cities, rioters and looters are arrested, but shortly after, prosecuting attorneys do not charge the arrested people and set them free to potentially continue their “criminal” behavior.

Habakkuk asked God, “Why do You make me look at injustice?” (3) Sometimes well meaning believers experience very unpleasant circumstances, because they live in a very fallen world. We are living in the city of Emmett, the state of Idaho, and the U.S.A. The Lord works in peoples’ lives, not only individually, but also corporately. There have been more people turning away from God than turning toward Him in my lifetime in our nation. As more people allow sin to rule and reign in their lives, it is acted out more publicly in the streets. When police are outnumbered or worse yet, commanded to “stand down”, wickedness, with it’s lawlessness and destruction, reigns. Even though believers may not desire the injustice and may work toward justice, they are citizens of cities, states, and nations where injustice is winning out. Habakkuk cries out, “God, horrible injustice is occurring! Do something about it now!”

God replies in Hab. 1:5-11, “I AM! You wouldn’t believe it if I told you. I am raising up the ruthless Babylonians. They are going to come into your nation and overtake you and haul you off as captives!” Be careful what you ask God to do. His method of handling injustice might be very different than what we expected. It sure was a shock to Habakkuk!

Habakkuk replied in utter confusion, “Lord, how can You in Your holiness appoint the wicked to execute judgment on those more righteous than them??!!” We all have scratched our heads raw and pounded our fists, demanding the Lord to justify Himself in the courtroom of our not so holy minds! Isa. 55:8-9 says: “For My thoughts are not your thoughts, neither are your ways My ways declares the Lord. As the heavens are higher than the earth, so are My ways higher than your ways, and My thoughts than your thoughts!” God’s holiness is not contradicted by His appointment of the Babylonians to execute His righteous judgment on the nation of Israel. As a matter of promise, the LORD predicted that He would do this very thing, if His people rebelled against Him (Dt.28:49-52, 64-68)! It turns out that “our righteousness” is not so righteous before a Holy God: “All of us become like one who is unclean, and all our righteous acts are like filthy rags; we all shrivel up like a leaf, and like the wind our sins sweep us away” (Isa. 64:6). And the LORD in His holiness can use any nation He chooses to be His board of education!

No matter who is declared the winner from the Nov. 3 elections, there are many injustices not mentioned in this article that need to be righted. There are many conflicts to be overcome. There are relationships to be reconciled. There are buildings to be rebuilt and businesses to be restored. There are people of varied skin colors who need to live like they belong to one and the same human race God created them to be. There are hearts that need to humbly repent of sin before God and turn to The Risen and Ascended Lord Jesus Christ in faith and obedience! We must not just say that we are a nation under God, we must behave like it! Vote for Jesus to be your King! Vote for His kingdom to come and reign not only in your heart, but on the earth!

Shepherding you in Christs' love, 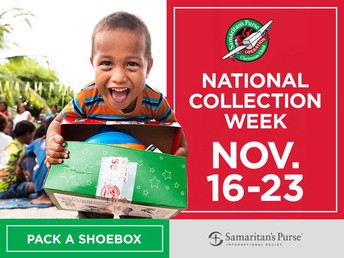 Did you pack your box yet?

If you haven't already, get to packing! Operation Christmas Child (OCC) shoeboxes need to be to the church by Nov. 22nd.

Although FBC will participate/support this effort, we will not have a packing party this year.

Last year we had an amazing number of boxes that were sent from Gem County and the Emmett FBC sent 79 shoeboxes! Even though we aren’t having a packing party, these boxes are more important now than ever – let’s try to beat last year’s amount!

Supplies (boxes, labels, wrapping paper) are available at the church. You could even have your own packing party! Check out the pictures below to see some of the items available at church in the Fellowship Hall. Items from Gerry Knight are available at a discounted rate, soccer balls with pump and needles for $4.25, and many donated items are free!

You can also Build a shoebox online! Find more information on building an online shoebox at https://www.samaritanspurse.org/operation-christmas-child/buildonline/. Please let Lance or Kathy know if you do an online box so we know how many boxes are sent from FBC.

Drop your packed shoeboxes off at the church – be sure to label it and include your information and $9 donation (label envelopes available at the church).

More OCC information and some great personal stories can be found on there website: https://www.samaritanspurse.org/what-we-do/operation-christmas-child/

Let's not let COVID-19 keep us from outdoing our last year's total! 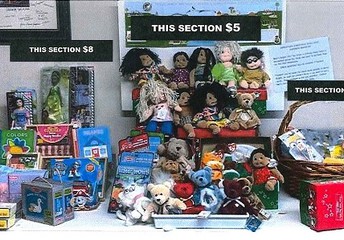 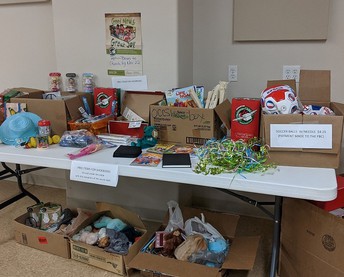 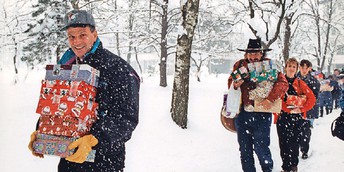 In light of the growing cases of COVID-19 in our county, we thought it best to cancel Community Thanksgiving Service, Wed., Nov. 25, and not risk further spreading the virus through the gathering of believers from multiple churches.

Our longing is to be together to fellowship and worship the LORD with like-minded believers, to celebrate the Good God that He is and to declare the good works He is doing, even during these uncertain times. We can identify with Paul in Rom. 1:10-13 when he said…

We urge you to safely spend time with family and friends to make known to one another the “Good” He has brought into your life through Jesus Christ! Continue to pray also for His protection as we navigate the stormy seas of this pandemic.

Thanking the Lord for His unfailing love! 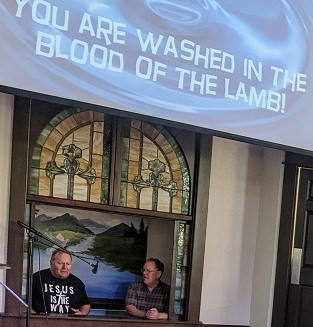 On October 11, 2020, Dave was baptized and received into church membership! Praise the Lord! Dave has been a long-time FBC attendee and a prominent member of the worship team. It is great to share in his confession of faith through water baptism and to have him as an "official" FBC member! 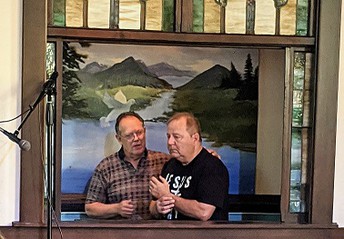 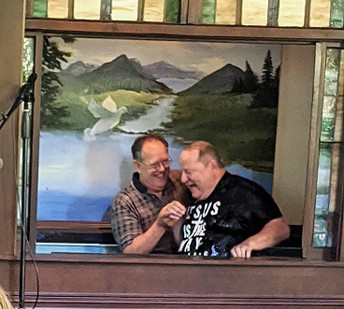 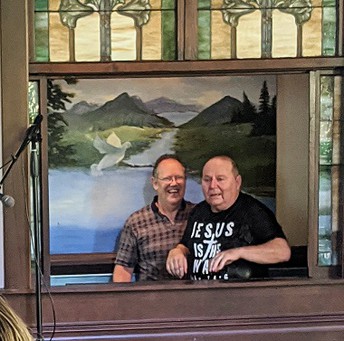 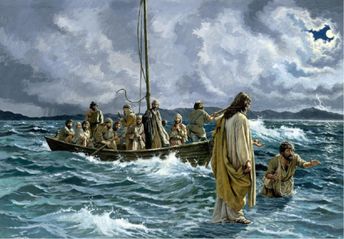 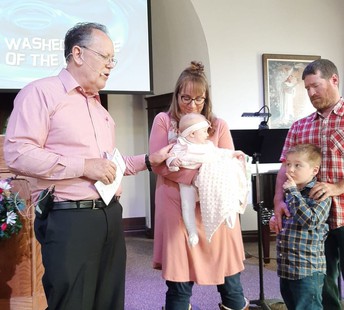 On October 18th, Josh & Maggie Mathews came forward with Ella Grace to dedicate her to the Lord. Through this ceremony, they commit to raise Ella Grace in the discipline and instruction of the Lord (Eph. 6:14). 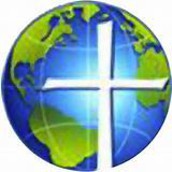 After four weeks of focusing on the International Ministries/World Mission Offering (WMO), our church collected $140 in contributions.

The WMO is one of several missions FBC has chosen/voted to support. These are reviewed by the Board of Trustees and submitted to the congregation with the church budget each year at the annual meeting. Your designated contributions help to fund these commitments/offerings.

If you want to know more about WMO or the other missions our church supports, click on the following links:

Special Offering/Collections during the year: 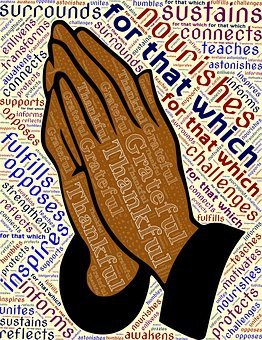 The morning sun that awakens me

Makes me thankful I can see.

Loved ones' voices each so dear

Make me thankful I can hear

Health and strength that get me through

Make me thankful for what I can do.

Faith that does not let me stray

Makes me thankful for each day.

A mind that reasons and is fair

Makes me thankful that I care.

A heart that accepts help from above

Makes me thankful for God's love. 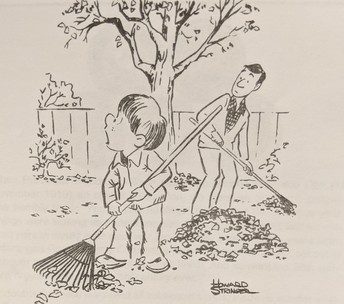 "How long, oh Lord, must I suffer under this heavy-handed taskmaster and these chains of bondage?" 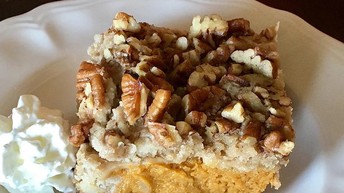 As the original dump recipe, the dump cake starts with a handful of ingredients (dry and wet) mixed together, sprinkled with cake mix, and finished off with pecans and melted butter. Move over, pumpkin pie. 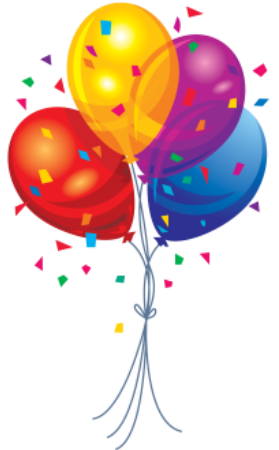