Get to know Craig.

Get to know Craig.

I am confident in who I am as a person.
I am extremely intelligent.
I have high career goals and envision a promising future myself.
I have one of the best smiles there it.
Hilarious should be my middle name because I am always making someone laugh.
Super outspoken and I stand for my beliefs.
I overcame bullying and it is had made me a stronger person.
I have an overall great personality. 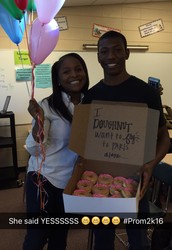 Not to brag- buttttt

I've been employed since I was 16 in the nutrition department at my school board.
I've done FFA for 3 years, and BETA Club for four years.
I have won first place in 3-AAAA region literary 2014-2015, and third place 2015-2016.
I have received numerous academic awards and accolades.
I took three years of French so I can speak conversational French.
I play Tennis spare time.