The surprising History of Homosexuality and Homophobia

Homosexuality is not really that uncommon. In one study it was shown that by the age of 49, 60% of american men have experienced some form of homosexuality. In Ancient Greece and Ancient Rome, many marriages were same sex, and they were not only accepted, but celebrated. Gender was not a determining factor in who should be able to marry. It really wasn't a problem until European churches started declaring it illegal. 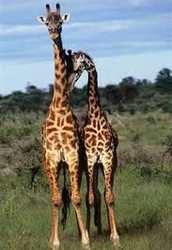 Humans are not the only species to exhibit homosexuality, which is what many people believe. It has been documented in over 450 species worldwide. One example of this is giraffes. Male giraffes will often rub their necks together and ignore the females. These behaviors can also create evolutionary advantages, by taking care of an abundance of one gender and offering better care for the offspring.

Schools don't teach anything that has anything to do with homosexuality, because it's a 'touchy subject.' But this causes many problems. This movement is happening right now but we aren't being told about it. Also, the kids who are LGBT may not know whats going on, and may feel alone and weird, which can lead to things such as depression and in some cases, suicide. Studies show that LGBT teens are 5% more likely to commit suicide, and 7% more likely to take illegal drugs than an average teen. Maybe if it was talked about in school, this number wouldn't be as high. A GSA is a good thing for schools to start so those students have somewhere to go. 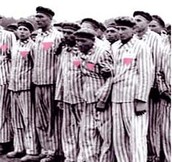 Homosexuality During the Holocaust

Jews were not the only ones targeted during the holocaust. Gypsies, disabled people, and homosexuals were also targeted. And we're told about the Gypsies and those other groups, but very rarely do we hear about the homosexuals. They were put into the camps as well, and were marked with a pink triangle. Between 5,000 and 15,000 gay men were put into the camps during the holocaust. According to survivors, these were among the most abuse groups in the camps. They were also experimented on to try to find a "cure." These experiments included castration and mutilation, and often resulted in sickness or death. 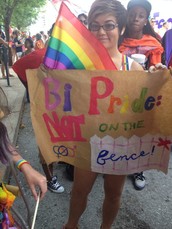 Toward the end of June every year, St. Louis has an annual gay pride festival. It's a great time, and there is rainbow everything. The main festival is on the first day, this past year it was a Saturday. Then the next day there is a parade, which starts at 11am. Everyone is nice and accepting there and everyone has the ability to be themselves. 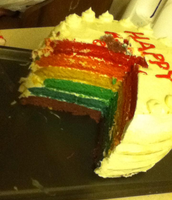 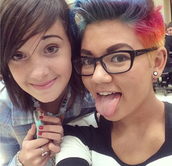 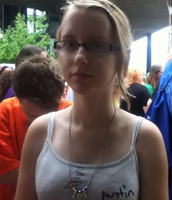