Get email updates from Estefany:

In August of 1587 , a group of about 115 English settlers arrived at Roanoke Island. They started a life there, finding ways to survive and provide food for their families. The governor of this new colony was John White. He decided to go back to England to get much needed supplies. When he came back, there was no trace of the colony that was once there, and they left behind no evidence of what could've happened. Jamestown on the other hand was the first English Settlement in the New World. 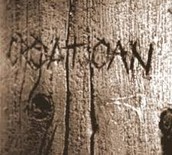 The only thing that John White found when he came back to Roanoke was this carving in a tree. It read "CROATAN". 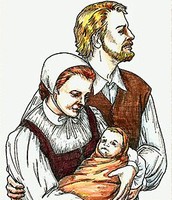 The daughter of John White, Eleanor Dare, gave birth to the first Christian and English child born in Virginia. This is why she was names Virginia Dare.

Jamestown was the first permanent English Settlement in North America, it is considered "America's Birthplace."

The 19th Amendment was put in place to mandate full suffrage in all states.! Before this amendment, women were not allowed the right to vote. Women suffragists fought for so long to gain this right, and were outraged when the 15th Amendment was added, which meant giving black males the right to vote before the white women could, which was not acceptable back in this time. There was a major organization called NAWSA (The National American Women Suffrage Association) who did everything from protest to strikes to get what they wanted , and to reach out to other women and teach them not to be afraid to fight for their equal rights. The founders of this organization were Lucy Stone, Carrie Chapman Catt, Susan B. Anthony, and Elizabeth Cady Stanton. 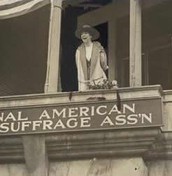 This is a picture of one of the women in the NAWSA giving a speech to other women about fighting for their right as a citizen of the U.S to vote.

"The Map Proves It"

This picture shows a map of the states in the U.S who were slowly but surely granting women the right to vote. 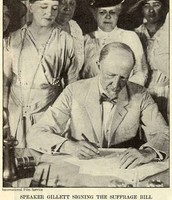 This picture shows the Suffrage Bill getting signed, putting an end to the women's fight.

On this day, 19 militants that were associated with an Islamic extremist group called Al-Qaeda hijacked 4 airplanes in an attack of terrorism against the U.S. Two of these planes were flown into the Twin Towers of the World Trade Center, in NYC. The third plane hit the Pentagon, and the fourth crashed in a field in Pennsylvania. Over 3,000 people were killed in this attack, including more than 400 police officers and firefighters. The "Master Mind" behind all of this was Osama Bin Laden. He was the leader of Al-Qaeda and was against the U.S because of America's support of Israel. Some of the 19 terrorists had live in the U.S for over a year and taken flying lessons. They managed to smuggle weapons into the airplanes to hijack them. 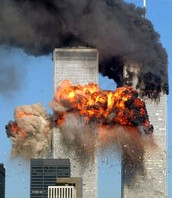 This picture shows the moment where the planes were flown into the World Trade Center in New York City, which eventually came tumbling down.

This is the leader of the militant group Al-Qaeda. He was on the top of the MOST WANTED list for more than a decade.

This image shows the aftermath of the third plane that was crashed into the Pentagon, just outside of Washignton D.C.

Facebook @WalterRaleigh_SmithJohn
John Smith was the leader of Jamestown, as Sir Walter Raleigh was the leader of Roanoke Colony. I think these are the two mot important people in this event, just because without them, neither one of the colonies would have been found or settled into.
Roanoke, VA, United States ronaokejamestownleaders@gmail.com 1237689878

Facebook @Suffrage_NAWSA
These women along with many others were the leaders of the organization NAWSA. They fought side by side for so long to achieve a mutual goal. They fought for their rights to vote! They are all equally as important because they would've never been able to do anything alone, they had to fight as a group as an organization in order to be heard.
Anthony.Paul.Stanton.Stone@aol.com 555555555

Osama Bin Laden was very important to this event, because he was the one who planned this along with his group of terrorists. This would've never happen if it wasn't for Osama. If anyone would've know, it could have been stopped. The other group of people who played a major part in these attacks were the firefighters and the police officers who risked their lives to save those people in need of help. The were just as innocent as the others. A lot of them even lost lives doing their job and protecting the people.
New York, NY, United States 7645529739673

I feel like the most important event that we have talked about in this class is the attack on 9/11. I think this because after this event many things have changed in the United States. Security in the airports is ridiculous, everything is meant to be more safe. This is all put in place to prevent anything else like this from happening.
Get Directions