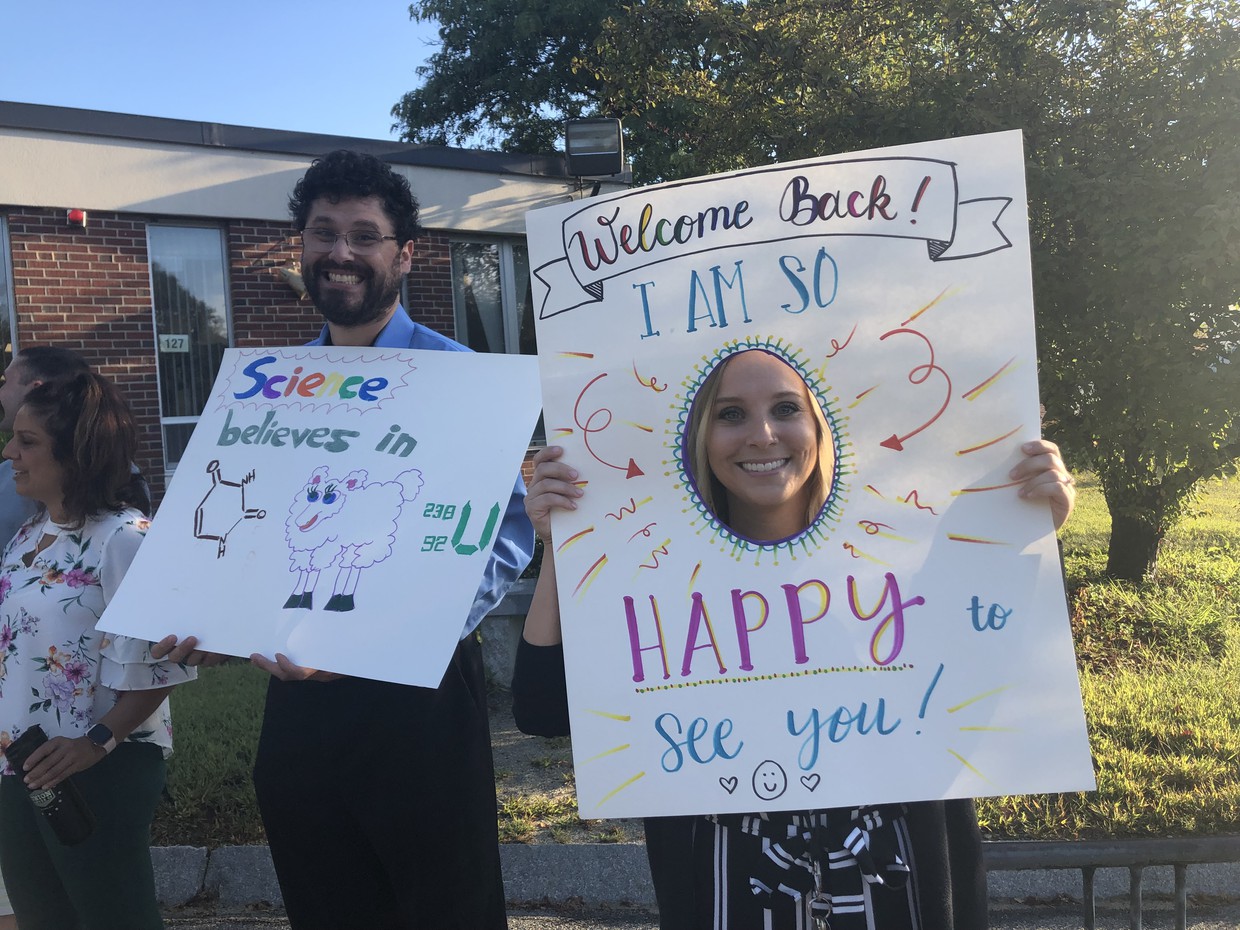 Faculty and staff welcomed WLC students back to school with music, high fives, and homemade signs of encouragement and humor. It was a wonderful first day of school and we are all looking forward to a fantastic 2019-2020 school year! 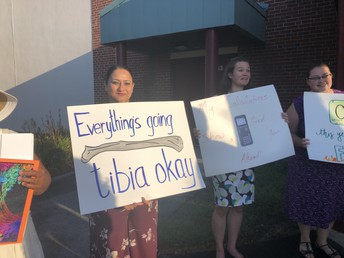 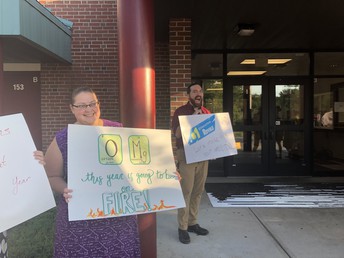 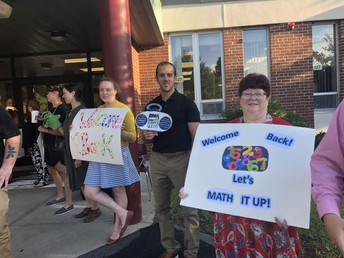 Students are off and running in the new forensic science class offered in the high school by Ms. Erickson. They began their first unit on crime scene sketching in September with Table Top Crime Scenes. Students needed to measure ALL items in the crime scene in order to create a detailed crime scene sketch. 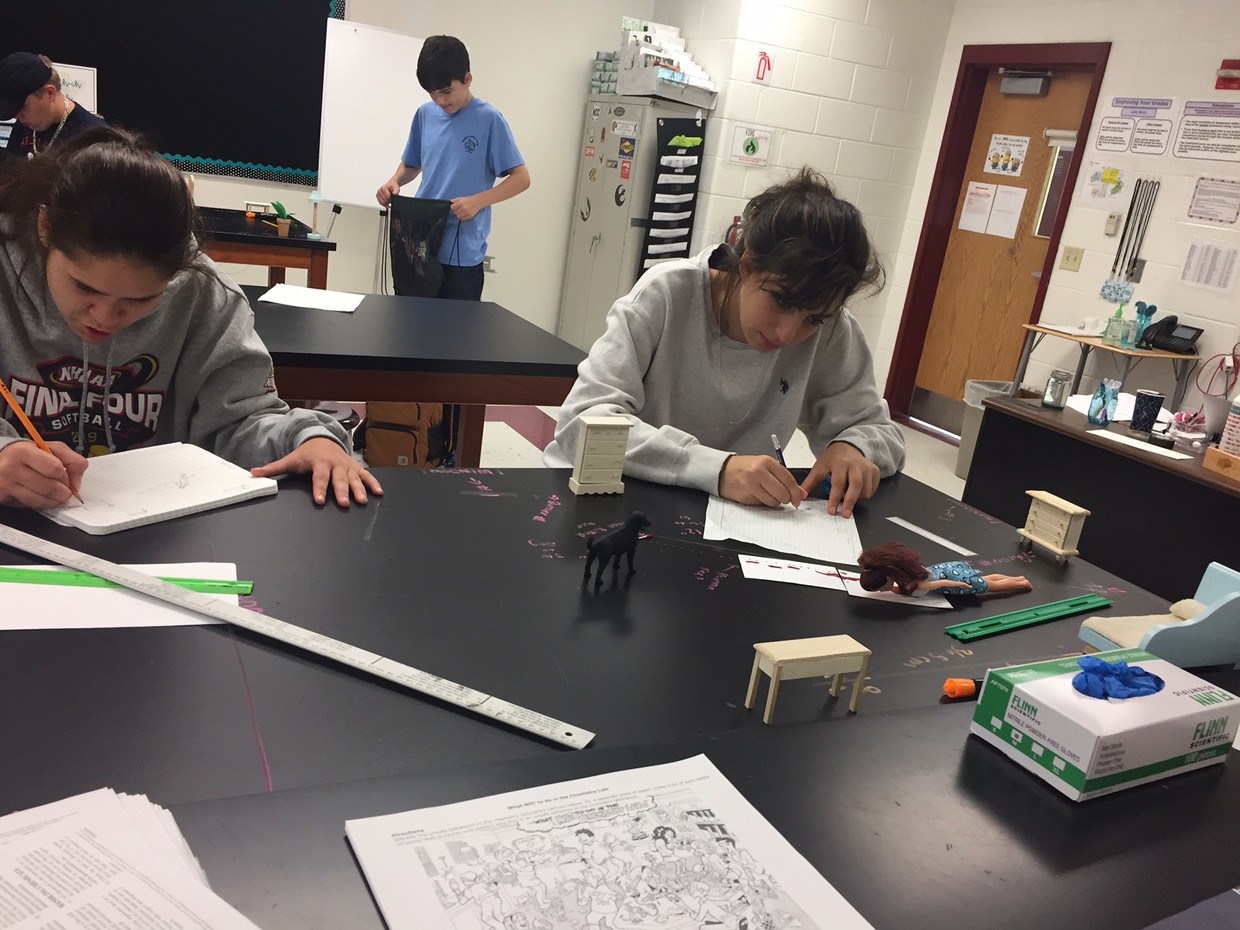 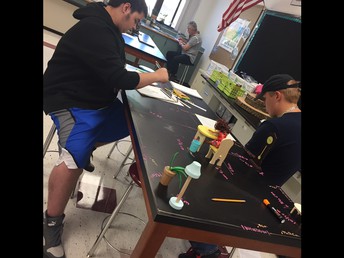 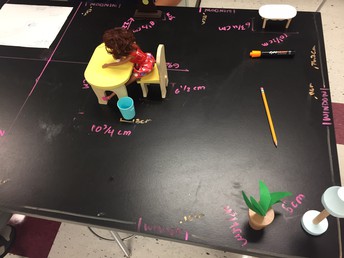 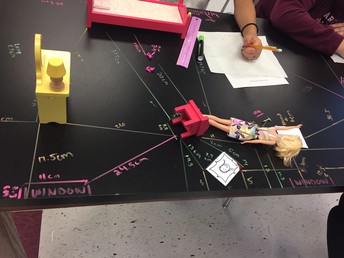 7th graders have been practicing coming up with scientific questions and modeling their thinking as they investigate how Line-X can protect a watermelon rind from a 150 foot drop onto concrete. As they investigate this phenomenon, they will delve ever deeper into the concept of matter, what it is, and how it changes all around us every day. Their year-long question is, "How do chemical reactions influence our world day to day?

So far this year, 8th graders have practiced developing scientific questions, figured out how neurons help the brain to learn, and are now knee deep in their study of forces and motion. What is speed? How do we graph motion? Why does a boiled egg move differently than a fresh one? 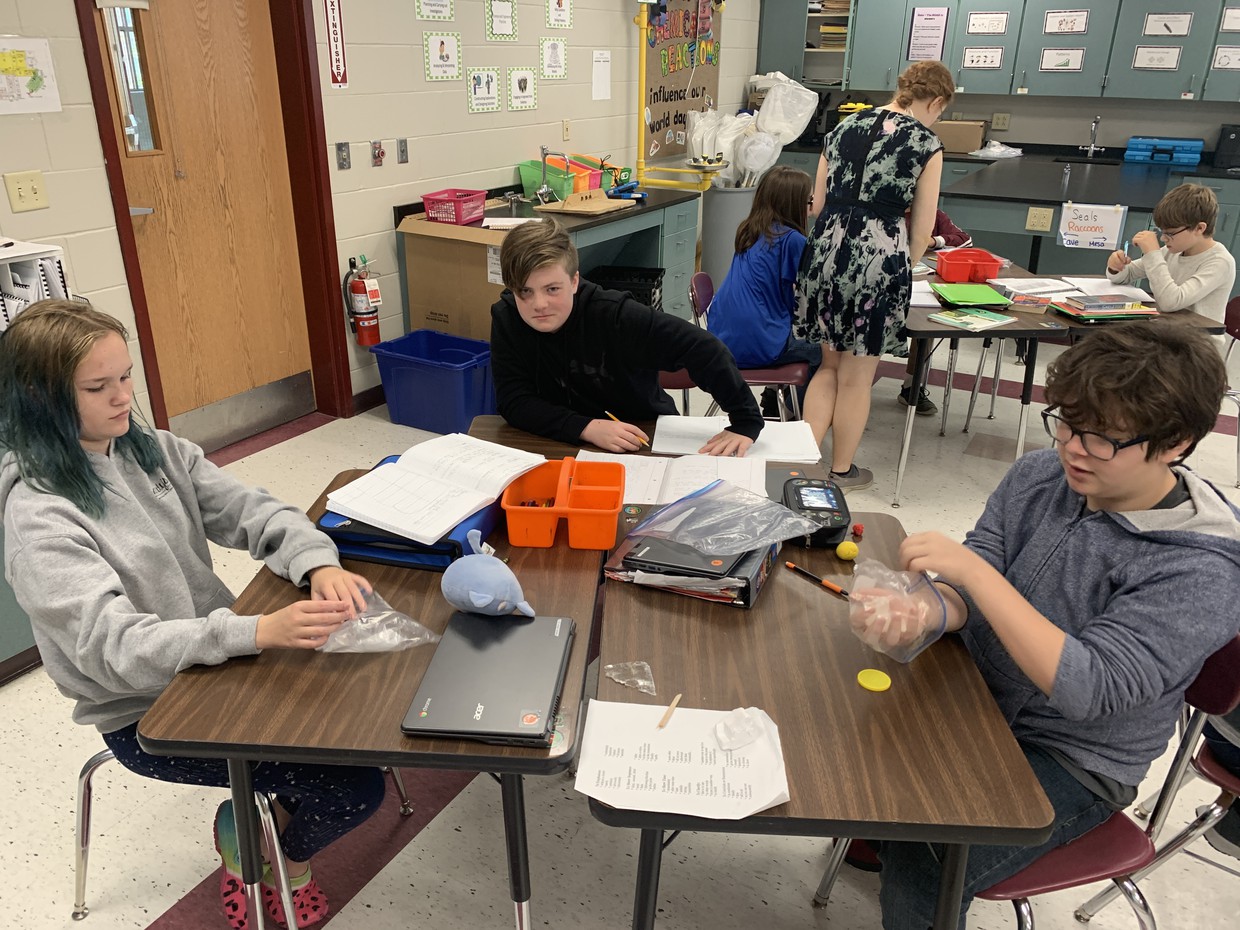 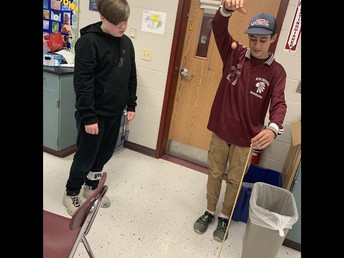 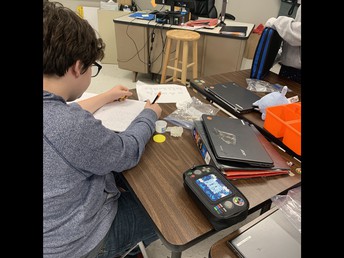 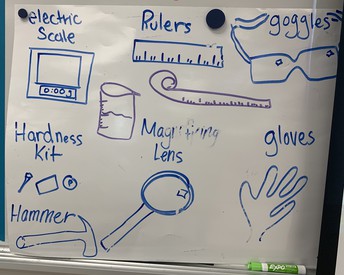 The super generation butterfly has left the building! This week we have watched as three monarch butterflies emerged from the chrysalides. We sent them on their way; they have a very long trip to México! The monarch butterfly has one of the most unique and spectacular annual migration patterns in the natural world! Each spring the monarch butterfly migrates from a very specific mountaintop in Michoacán México and makes its way to Wilton, NH! However, due to the decline in the caterpillar’s only food source, the milkweed plant, the populations have decline in the last two decades by over 80 percent! This year, the students are participating in an interdisciplinary, student-led, community garden project to encourage the preservation of the monarch butterfly, this important pollinator. In addition, we will be writing letters to the Santuario de la Mariposa (a world heritage site) in Michoacán México (in the target language) to inform them of all we are doing to prepare for the arrival of the monarch butterflies next spring. Please stay tuned for updates and…plant milkweed! Gracias! 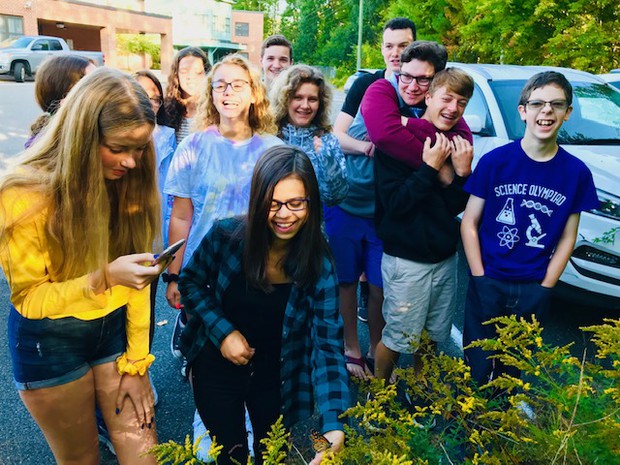 Young artists of the WLC community began the first month of the 2019 school year with a deep investigation of eight dispositions to comprehend HOW to think, and thus engage, like artists. The founding of these 8 Studio Habits of Mind: Develop Craft, Engage and Persist, Envision, Express, Observe, Reflect, Stretch and Explore, and Understand Art Worlds are a result of a multi-year research project (from 2001-2007) through the Harvard's Graduate program Project Zero, and embraced by art educators and arts-centered schools nationwide.

Each of the middle and high school classes at WLC began on the same footing, with every student facing the challenge of familiarizing themselves with this new language as a guiding pathway to their own unique aesthetic of self-expression. As the students connected in class-wide exercises, they familiarized themselves with various traditional mediums such as pencil drawing, oil pastel, ink, and watercolor. In addition, they were challenged with the task of sharing collaborative practices of art criticism that require close 'observation' of each other's artwork, which lead to student questioning, interpretations, and authentic 'expression' within their own meaning-making.

At the end of September, the students have ended their first full week of studio time where they have embarked on their own individual starting points of a plan for their first multi-week long project. Their task is to create a piece of 2-dimensional artwork (with the exception of the 3D class) that either visually represents, or mindfully embodies, one the the Studio Habits of Mind that they were assigned to deeply investigate. Through 'envisioning' the plan of idea, 'reflecting' in written journal entries, and researching exemplary artworks of the 'the artworld', it is already clear that WLC students are becoming comfortable within the essential habits of mind for self-directed learning by 'stretching and exploring' beyond their comfort zones and not giving up through the values of 'engaging and persisting'.

The ultimate goal within the newly presented art program at WLC is not necessarily to first teach the student how to methodically create a certain art 'object' as a means to an end, but to instead focus on 'developing the craft' of one's own critically creative problem solving strategies. This alternative agenda supported by the Studio Habits of Mind immediately relieve the young artist's from a pressure to meet a certain standard of crafted perfection, and instead fosters the student's own path of discovery. One of the greatest takeaways from the art teacher at WLC is that students are starting to communicate to each other with praise about the art that they are each creating with such a great degree of variety. No longer is there room for comparing, but instead commending! 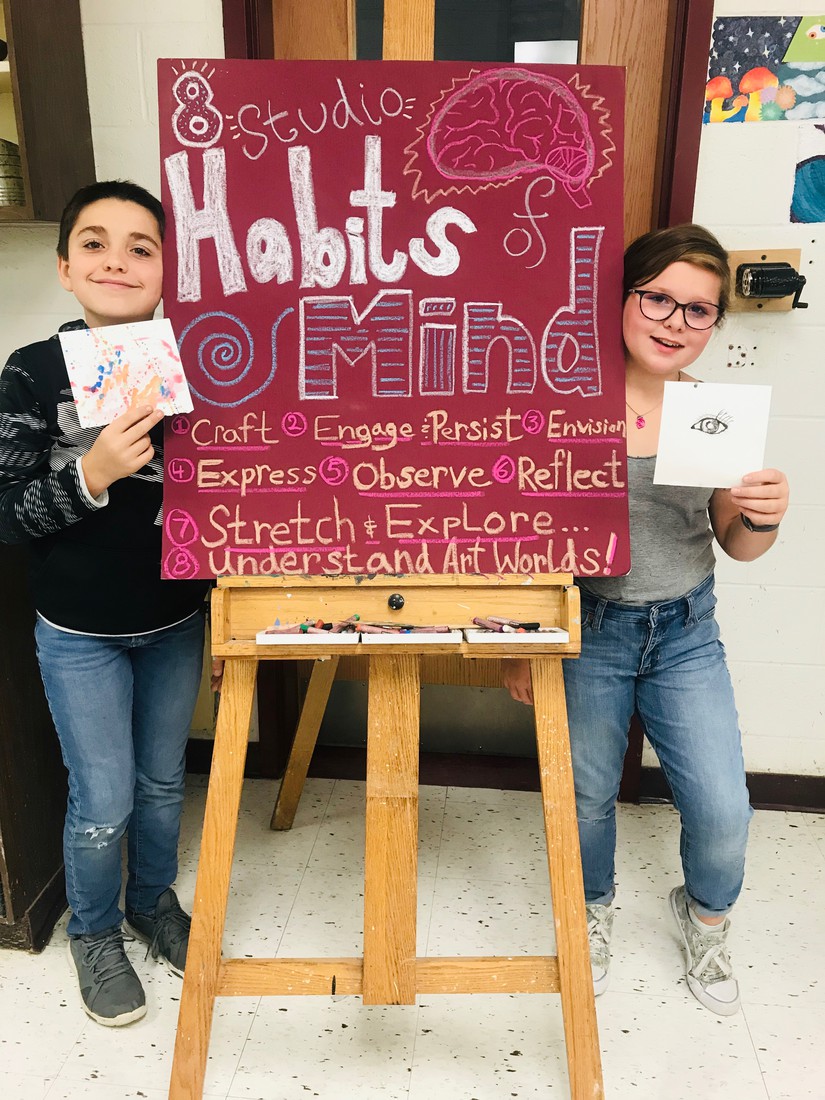 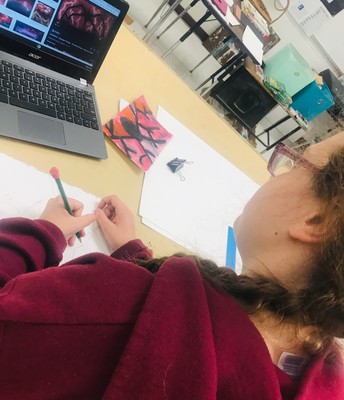 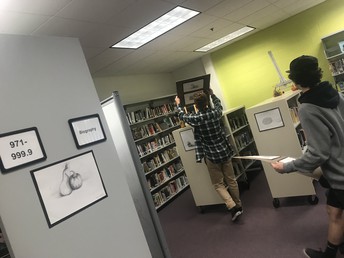 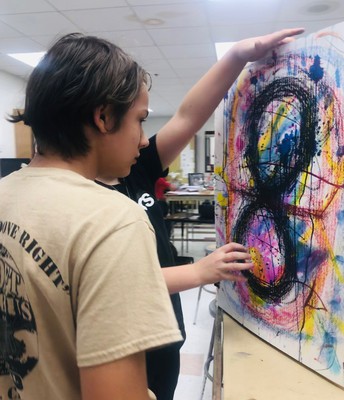 The Robotics Teams at WLC!

On Tuesday September 24th, the High School robotics team was lucky enough to have a veteran local robotics team visit and display their robot from last year as well as provide the team with pointers and experienced advice. WLC students are SO excited for thier opportunity to create and program their very own robot.

FIRST (For Inspiration and Recognition of Science and Technology) was founded in 1989 to inspire young people's interest and participation in science and technology. Based in Manchester, NH, the 501(c)(3) not-for-profit public charity designs accessible, innovative programs that motivate young people to pursue education and career opportunities in science, technology, engineering, and math, while building self-confidence, knowledge, and life skills.

FIRST is more than robots! FIRST participation is proven to encourage students to pursue education and careers in STEM-related fields, inspire them to become leaders and innovators, and enhance their 21 st century work-life skills.

WLC is fortunate enough to have our two new robotics teams (FIRST Tech Challenge for High School and FIRST Lego League for Middle School) fully funded through grants we received thanks to the work WLC Computer Science teacher, Andrew Tyler put in.

Join the Coop Connection for the October meeting! A fantastic group of parents, faculty, staff, and community members who meet monthly to discuss all things WLC.
Get Directions

The bus will depart WLC at 8:00am and will return to WLC at 1:30PM. Students can bring a lunch or bring money to purchase one at UNH. Permission slips and a check in the amount of $5.00 made out the WLC must be turned in to the School Counseling Office no later than Friday, October 4th
Get Directions

All Juniors will take the PSAT at this time.
Get Directions

Held in the School Counseling Office
Get Directions