By: Haley Smith and Bella Hernandez

By: Haley Smith and Bella Hernandez

The map below gives a great representation of where modern day slavery occurs today in the world. The countries that are the worst offenders are pictured in the darkest shades. These include China, Russia, Thailand, Mexico, India, Indonesia, Pakistan, Sudan, Nigeria and The Congo. 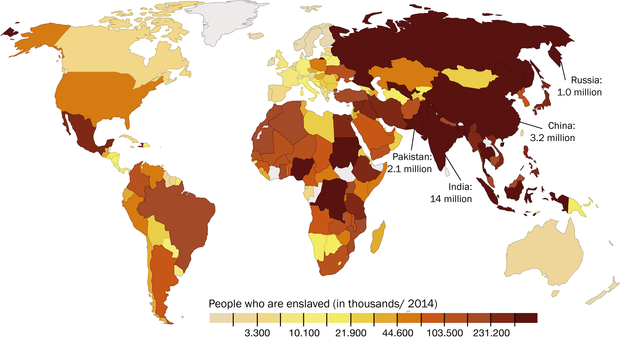 Why is modern day slavery an issue today?

Modern Day Slavery is an issue today mostly due to its prevalence in the world. Humans have become increasingly cheap to buy and cheap to use. In specific areas of the world it is so easy to obtain a slave that those enslaved in these areas are virtually disposable. Slavery is very profitable due to the low cost to enslave people and keep them working. This is also an issue because of the inevitable economic problems that may result from action undertaken to free the slaves.

Slavery dates back to 18th Century B.C in Babylon. It can be seen in most all societies and cultures worldwide whether today or hundreds of years ago. Slavery is said to have began simply with civilization. More specifically, modern day slavery has direct ties to poverty, police/government corruption and the population boom. People are taken advantage of and forced to work under the threat of constant violence. They are enslaved for profits, unable to walk away. Small debts become unpayable and impoverished peoples seeking jobs are held prisoner for years and years until they either die, escape, or, most unlikely, are liberated.

Truthfully, we believe that there are multiple solutions to ending this horrific crime. However, each is much easier said but realistically, is extremely difficult to put into action. We propose that there needs to be much more severe punishments and stricter laws put in place regarding human trafficking. We acknowledge that ending modern day slavery at once is very impractical, however taking a series of steps over a course of many years is not. We do not think that the slaves should necessarily leave their jobs once freed, rather we believe that the conditions in which they work should be improved and they should begin to receive compensation for their work. An unimaginable difference in spirits would appear once these imprisoned peoples are working without a constant fear of death, and more importantly working for themselves and their families. Human trafficking is an economic crime that has been occurring worldwide for decades and its time we step up together to put an end to it.