Flamenco dance and music came from Greek and Roman influences with later inputs from Indian, Moorish, and Jewish cultures. When the Moorish and Jewish populations came to the Iberian peninsula Andalusia's already thriving music and dance began extracting characteristics from the new populations. The results of these combinations of different elements has produced the dazzling flamenco dance we know today.

In the 18th century, the flamenco dance emerged with the flourishing development of flamenco music.and it appeared as a recognizable structured dance. The flamenco's design revolves around the hearty voice of the singer, But it is the impassioned flamenco dancers that have stunned audiences in special music cafés called cafés cantantes. While the dance has become the flashy flamenco dance and music that has taken the world by storm. it once started as personal expression in caves by gypies. 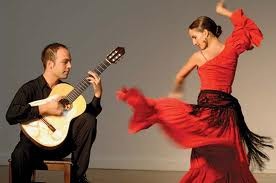 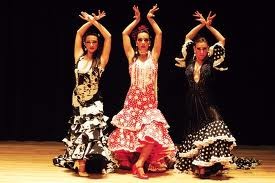 Castanets are a percussion instrument often used in Flamenco dancing to produce a series of clicks and rattles to accompany the dance, music and song. 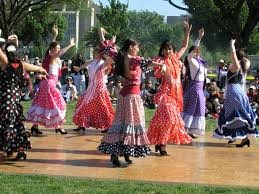 Experienced Flamenco dancers often improvise during their dance when they are inspired by the rhythmic hand clapping and dramatic guitar playing.