In 1852 the old squared bell of the latterly chapel of Fourvière was rebuilt and was crowned with a new statue of the Virgin Mary. The date set for its installation was originally 8 September, the day marking the nativity of the Virgin. However the banks of the River Saône overflowed a month before and the worksite was flooded. Consequently, the ceremony was postponed until 8 December.

Plans were made for an illumination of the city at night. However on 8 December it poured with rain. As a result, the night illuminations and celebrations were canceled.

However the rain stopped in the early evening. The people of Lyon were overjoyed by the sudden change of events and aligned thousands of small lights (des lumignons) along their windowsills and balconies. The church leaders also lit up the chapel of Fourvière.

Ever since, The Festival of Lights has been celebrated every year on 8 December in Lyon, France.

The Festival of Lights has evolved into a major tourist attraction and draws in several million people each year. It is held over 4 days. The two main stages of the illuminations take place on the Basilica of Fourvière and at the Place des Terreaux. The festival involves spectacular lighting and video effects, visual arts and creative audio features. Over 80 lighting scenes are installed around Lyon during the festival. Each night has a different theme and colour scheme.

The Festival of Lights includes a range of different displays. Many buildings are illuminated by bright, eye-catching colours. Video, music and sound effects accompany the illuminations. There is a fireworks display at the Basilica of Fourviere. There are also many other surreal lighting installations such as the ones below. 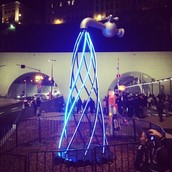 A Faucet of Light 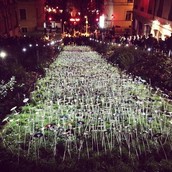 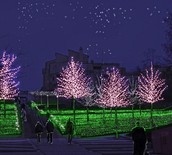