The siamang is the largest and darkest species of gibbon. These very acrobatic primates live in southeast Asia. They spend most of their lives in trees. Because they are so dextrous while moving in the trees, almost no predators can catch them. The siamang is the largest, darkest, and noisiest species of gibbon. Siamangs have a throat sac which they can inflate to be about the size of their head.

Several gibbon species are threatened by imminent extinction in the very near future. Gibbons not only include the most endangered apes but also the most endangered primate species of the world. The main reasons for this are habitat loss and degradation, hunting and illegal trade. Preservation of the tropical forest is imperative to gibbon survival - if it disappears, so do the gibbons. 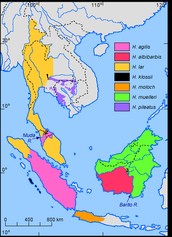 Solutions for protection of the animal

Siamangs are losing their natural habitat as human agriculture encroaches upon it and population numbers are decreasings. Here are some ways to help endangerments: