Iran is using Smore newsletters to spread the word online.

Get email updates from Iran:

Suicide means ending your own life. It is sometimes a way for people to escape pain or suffering. When someone ends their own life, we say that they "died by suicide". "A suicide attempt" means that someone tried to end their life, but did not die.

-The most common reasons people commit suicide is because they are depressed, psychosis is much harder to mask than depression and arguably even more tragic

-Another reason is because they're impulsive.Often related to drugs and alcohol, some people become maudlin and impulsively attempt to end their own lives or because they have a philosophical desire to die, these people aren’t depressed, psychotic, maudlin, or crying out for help. They’re trying to take control of their destiny and alleviate their own suffering, which usually can only be done in death.

-Other common reason people commit suicide is because they've made a mistake and they don't know how to control it.

They nedd some HELP!!!

How can we fix suicide 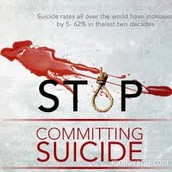 -You can talk to that person and let them to explain you how do they feel because they only need somebody to listen their problems.
-You can take that person to the psychologist because they are expert persons and they can talk to them and give them advices.
-You can go online and see how do other persons resolve suicide and you can see examples to help that people and how to talk to somebody that wants to commit suicide.
-You can tell them every day that somebody loves them and somebody cares of them.

Iran is using Smore newsletters to spread the word online.