DeAnna is using Smore newsletters to spread the word online.

Get email updates from DeAnna:

Mexico is a Federal Republic. Mexico was established in 1824 after declaring its independence form Spain in 1810. Mexico's current president is Enrique Pena Nieto, he was elected July 1st 2012 and took office on December 1st. Mexico has 31 states. Governers in Mexico are normally elected for 6 year terms. It is required in Mexico that all citizens 18 years of age or older participate in elections. Mexico's laws include

Mexico is made up of a large central plateau. Mexico's climate varies with altitude and topography. The highest peaks of mexico's mountain ranges are always covered in a blanket of snow. It is hot in the summer and chilly in the winter because of northern winds. IN the east rainfall is high. Northwestern Mexico and Inland areas are the more drier areas of Mexico.

Family and social networks are important aspects in Mexico. The tradition of Mexico's family relationships van be very expansive and include people who aren't related through blood but are close family friends. Catholicism is the main religious practice of Mexico. Mexico is always very uptight about politeness and formality. The people of Mexico tend to be very nationalistic. A traveler who negatively talks about politics or criticizes the country would really be looked down on. The golden rule of Mexico is to never insult ones pride or honor.

a quincenera is a celebration of a girls 15th birthday it is very important because it is the reaching of women hood for a girl.it is also to thank god for his blessings and present a young women to the community. This celebration does not only serve awareness for the girl but for her parents and grandparents. Most societies have special rituals. This celebration begins with a mass to give thanks for a completed childhood. Then the girl leaves a boquet of flowers for her sisters then the partying begins! 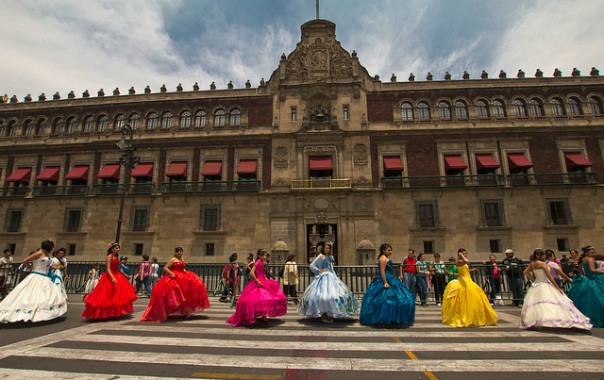 Compatability score compared to the US

i would give Mexico a C- because their definitely different from the US but some things are the same. Mexico isn't very urbanized compared to the us because they don't have very many big city's so they don't have as many advancements or opportunities as the us. Mexico's economy isn't very advanced

DeAnna is using Smore newsletters to spread the word online.