For my book project I picked "I Am Malala," by Malala Yousafzai with Patrica McCormick. This book is about a girl named Malala, whose town was taken over by the Taliban at age 10. They stared saying how somethings women did, was against Islamic belief. Malala saw her little town in the valley of Swat transform from a peaceful place in Pakistan to a place of warfare and terrorism. Malala decided to speak up about women's rights, more specifically education. She first did it in secret by writing a blog to the paper about life in swat under an anonymous name. It wasn't until that she was known by other people as a activist, that was she targeted. On October 9th, 2012, Malala was shot in the head on her way home from school by the Taliban. No one thought she was going to make it, but she did."The Taliban shot me to try to silence me. Instead, the whole world was listening to my message now." I Am Malala, by Malala Yousafzai with Patrica McCormick, pg.164 .She has since recovered and is now one of the most famous Activist for young women everywhere. Malala Yousafzai was a girl who stood up for women's rights and was shot in doing so.

Malala Yousafzai and her family currently live in Birmingham, after her surgery from being shot by the Taliban. Malala Yousafzai is from Mingora, Pakistan. She is 5 feet, and has brown skin and black hair. She has Two brothers and a mother and father." My journey has not always been easy, but I have always believed that truth and Goodness will prevail and am thankful above all to be able to speak for those who cannot. Thank you." I Am Malala, by Malala Yousafzai with Patrica McCormick, pg 197. Time magazine called her one of the top 100 influential people in 2013.

I believe the theme for this book is, the truth will be seen , but only if you are able to speak for those who cannot. it means People can only see the truth if you are willing to stand up for that cause." So here I stand....One girl among many. I speak not for myself, but for all girls and boys. I raise up my voice not so that I can shout, but so that those without a voice can be heard" I Am Malala, by Malala Yousafzai with Patrica McCormick, pg. 191.

Malala is known for making speeches about girls education and her auto-biography,"I Am Malala;" her are a few quotes by her. "my father?"" I Am Malala," by Malala Yousafzai with Patrica McCormick, pg.139." Who will pay? I wrote. We don't have any money ." Am Malala, by Malala Yousafzai with Patrica McCormick, pg.140. These two quotes show how eventhough, Malala was fighting for her life in the hospital all she could worry about was her father and family; and payment. " So yes the Taliban have shot me. But they can only shoot my body. They cannot shoot my dreams, they cannot kill my beliefs, and they cannot stop my campaign to see every girl and every boy in school." Am Malala, by Malala Yousafzai with Patrica McCormick, pg.188. This quote shows that Malala is fighting for children everywhere, to have an education and that no matter what the Taliban could do it wouldn't stop Malala's dream of seeing every child in a school. Malala today still fights for educational rights of boys and girls everywhere. 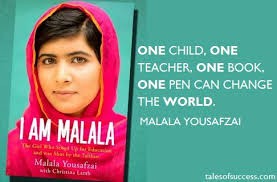 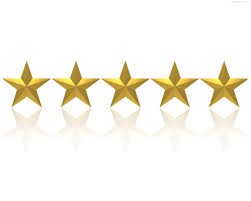 The book " I Am Malala" deserves five stars for many reasons. Most 8th graders don't like to read non-fiction, but this book was one to remember. It's one of my favorite books because of how it shows that one person, who was younger than I am, changed the world. While I'm dreading going to school, she's fighting to go to school. You realize it's won of those you don't miss it until it's gone kinda thing. " I Am Malala Is is very inspiring book, and I would recommend it to anyone. 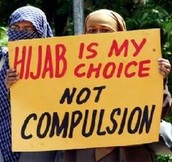 HIjab is the head scarf they wear around their head.

This picture is a representation of how Islamic women have little rights in the middle east. 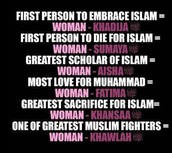 Women in the middle east are sometimes just seen as the helpless. But we can't forget how much they've done.
Women's Rights in the Middle East