Lead-up to the Revolution

Lead-up to the Revolution

The View from the British Side

With the passage of the Sugar Act (1764) and the Stamp Act (1765) the British began to levy what they believed to be a fair share of colonial responsibility for the defense and upkeep of the colonies. Additionally, the Currency Act (1764) banned colonial currency and notes of credit that were unregulated and of exceptionally questionable value.

The View from the Colonies

The colonists had grown used to the British passing laws and taxes but not enforcing either (salutary neglect). Additionally, by 1776, the colonists had over 150 years of experience at self-government (e.g. House of Burgesses - 1619, Mayflower Compact - 1620). Lastly, the colonists felt that Parliament could only tax and regulate trade because the colonies were not directly represented in Parliament (e.g. Sam Adams and James Otis - "No taxation without representation"). 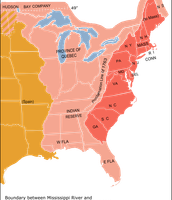 British racked up a lot of debt, and they wanted colonists to pay some of it

Colonists were treated poorly while serving in military.

Pontiac's Rebellion led to the British creation of a Proclamation Line.

Round 1. The British wished to raise revenue form the most lightly taxed citizens in the empire, North American colonists. The first taxes imposed were the Sugar Act (1764) and Stamp Act (1765).

The most important response to the early taxes was the Stamp Act Congress (1765) and the Virginia Resolutions on the Stamp Act.

The Tea Act was meant to support the East India company but by 1773 the colonists were in no mood for any tax. Thus, thinly disguised colonists dumped tea into Boston Harbor as a boycott and "nonviolent" response to the Tea Act.

Subsequently, Parliament passed the "Intolerable Acts" including the Boston Port Act which kept Boston Harbor closed until all of the dumped tea was paid for.

However, a boycott of British goods was called for and Committees of Observation and Correspondence were set up to inform the colonists of British actions and enforce the boycott.

When British troops attempted to seize colonial munitions, "Minutemen" at Lexington and Concord responded somewhat effectively "...where once the embattled farmer stood and fired the shot heard 'round the world."

Contemporaneously, Thomas Paine published Common Sense, a straight forward set of arguments of why the colonists should rebel. "“Small islands, not capable of protecting themselves, are the proper objects for kingdoms to take under their care; but there is something absurd, in supposing a continent to be perpetually governed by an island.”

Although not all delegates to the Second Continental Congress wished to rebel (Olive Branch Petition), a formal Declaration of Independence was adopted in early July.

Between 1763 and 1776, the colonists changed their appeals from that of loyal British citizens to those based on unalienable or natural rights.

The radicalization of the average colonist was in part based upon a series of events that utilized collective colonial response and action against the British.

The Enlightenment. The ideas of John Locke (natural rights theory - pictured) and Roseau

( social contract theory - not pictured) became paramount in colonial demands by 1776. Gone were petitions and remonstrances of loyal British citizens. Replacing the petitions were the ideas of the Enlightenment ("...life, liberty, and the pursuit of happiness").