I am seeing some great responses in our Forum as well as in your essays. Keep up the good work! Remember Country Music Assignment is a project which is an essay that must be at least 500 words. If you complete the topic points of #1 and #2 you will have no issues. If you are having problems submitting it you can always send it to me in an email.

Please let me know if you have and questions and I will be happy to help.

Have a great day!
Mrs. Moncrief 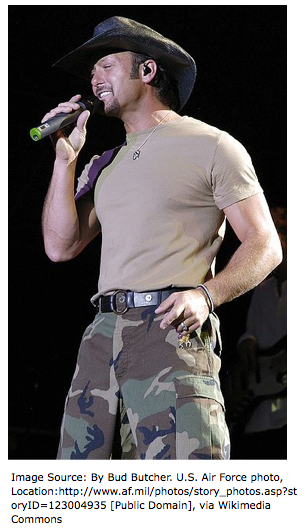 Samuel Timothy McGraw was born in 1967 in Delhi, Louisiana. His mother, Betty was a waitress and his father, Tug was a pitcher for the New York Mets and later the Philadelphia Phillies. He went to college in Louisiana and did very well in baseball until a knee injury. So he took up guitar. His roommates said he was awful and would often hide his guitar so he couldn't play. He finally dropped out and decided to go to Nashville to pursue a career in music.

This did take some time as his fist song did make air time at a radio station, but many say it was terrible and only made it on due to his father's name. He would continue to record some more songs, and finally got it right with his second album, Not A Moment Too Soon in 1994 becoming the best-selling country album.

McGraw would go on to record many more songs and albums, most doing really well. He is best known for collaborating with artists of different genres such as: Nelly, members from The Eagles, Def Leppard. He is also known to collaborate with his wife, Faith Hill.

He raised a lot of money for charities over the years such as: the American Red Cross, Hurricane Katrina, various charities supporting children with disabilities, his own The Tim McGraw Foundation for children and adults with brain tumors, and the list goes on and on. In 2004 he recorded one of his most poignant songs, "Live Like You Were Dying" which was dedicated to his father who died of a brain tumor.

He has dabbled in acting, with his biggest part as the father, Sean Tuohy in The Blind Side opposite Sandra Bullock. Tim McGraw continues on his road of success his most recent hit, "Humble and Kind" released this year on February 1, 2016. He would perform this song at the 2016 ACM Awards, and it continues to do well on the charts!