Played lots of soccer in his younger ages with his school mates and would then go home and stay their while his siblings would go to work for their father.

Osama was a huge influence because of all the money he had, so while fighting the soviets he created Tora Bora complex to fight the Soviets where the money was supplied by the Saudi's and the weapons by the Americans

Beat the Soviets in 1989 and would then go on to be under the protection of the Afghan government also known as the Taliban; Towards the end of the war with the Soviets he created the group Al-Qaeda.

Created in 1988 by Osama Bin Laden and Abdullah Azzam.

First attack was a bombing of a hotel in Aden Yemen which was housing American Troops, but did not kill any of the troops besides two Austrian Tourist.

Al-Qaeda also attempted an assassination of the Egyptian President Hosni Mubarek in 1995.

Osama had reached the FBI's most wanted list on August 7th of 1998 for the U.S. Embassy bombings he had planned out in Nairobi, Kenya, Tanzania, and Dar Es Salaam.

More notable terrorist acts of Osama dealing with the United States was the huge impact on America in the year of 2001 where he had sent two planes into the World Trade Center on November 11th. 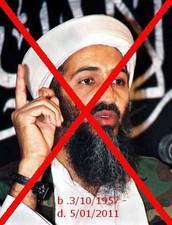 Killed in a compound located in Abbottobad Pakistan

August 10th the United States had traced him to this compound and had drones flying everywhere around his position and finally found the right time to move in on May 1st 2011.