Our week of math started off with me sharing a little fib I told during Unit 6. I explained to the kiddos that we cannot compare unit fractions that have two different sized wholes. The reason I explained it to them this way was for when they were drawing comparison drawings. I needed to make sure that when they drew 1/8 and 1/3, the two fraction drawings had the same sized whole. For Unit 7, we will focus on comparing fractions with different sized wholes. We started class with an example of three hungry students who ordered pizzas. One ordered a personal pan pizza, the other ordered a medium pizza, and the last student ordered a large pizza. They each at 1/8 of their pizza, but we discussed how they did not eat the same amount because the pizza sizes were different. 1/8 of a small pizza is going to be a much smaller slice than 1/8 of a large pizza.

Our week started with a new challenge and a new component to our circuit unit: a motor! The students were faced with a task to get the motor running using only a D-cell and a motor. They were just like pros and got the motor up and running quickly! They were introduced to other new components as well! They got to use bulb holders, circuit boards, D-cell holders with Fahnstock clips and switches. We were able to use switches to get a motor running and a bulb. They learned that switches are used to turn on and off certain circuits, like the lights in our classroom for example. When a switch is "closed", the circuit should be working and electricity is flowing. When the circuit is "open", the circuit is not working.

Lastly, we learned about conductors and insulators. The students made a circuit on a circuit base with a string attached to it. They wore these motor circuits like a necklace, and they had two wires that each had one side that was not connected to anything yet. They had to walk around the room and touch objects with the two wires to see if that object was a conductor, allowed the flow of electricity to happen, or an insulator, an object that does not help electricity flow. If the object was a conductor, their motors on their circuit boards would turn on. If it was an insulator, they would not hear their motor working.

Reading and Writing: This week, we dove into the world of fairy tales and myths. The students were able to explore The Grimm Brother’s fairy tales, and Greek Mythology to pick a tale they found interesting enough to create into a tabloid article. We first learned what a tabloid is, and looked at silly outer space alien and Bigfoot story examples. Then we looked at a graphic organizer to see how a news article is set up. We first had to find the who, what, where, when, why, and how. Then since our news stories are based on fantasy stories, the students created quotes from the “witnesses.” Finally, the students found interesting details to add to their story. The students explored unfamiliar fairy tales and myths during our silent reading time getting more familiar with stories untold by Disney.

The students performed their play in front of the Edwards/DeWitt House this week. We created props, both at home and at school (Thank you parents!), practiced numerous times and memorized the lines. The students worked on taking a story and making it their own. Please make sure to ask your child how their group made a few changes to their play to add humor and entertainment.

Project Pitch It: The students were given a challenge for their creative unit. They had to create a new fidget. They will be marketing and persuading buyers (another visiting class) next week on all the pros to their fidget in comparison to the lovely fidget spinners seen today. May 25th we will be heading to see and meet the real Project Pitch It contestants and creators. We are short volunteers for the field trip. If you are able to come, please let me know next week. There is no cost to the students or the chaperones.

Library Permission Slips Due May 18th 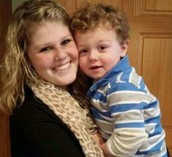 dewilyn@pewaukeeschools.org (262) 701-5557 pewaukee.schoolwires.net/site/Default.aspx?PageID=1028
Embed code is for website/blog and not email. To embed your newsletter in a Mass Notification System, click HERE to see how or reach out to support@smore.com
close