Rhonda is using Smore newsletters to spread the word online.

Get email updates from Rhonda:

Review of "Out of Nowhere"

Review of "Out of Nowhere"

Over the course of six weeks, Ineida, Semako, Koffi, Heesung, Ken, and Stefan, read and discussed the book "Out of Nowhere" by Maria Padian. This is their review of the book. We hope you enjoy it! 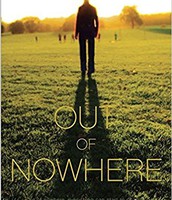 The characters are non-english speakers who live in the U.S.A. and come from Somalia. One of the main characters is Tom. This book’s story is about Tom. Tom is a nice and handsome guy. In addition, he is a captain on the Chamberlain high school soccer team. He tries to understand an alien culture. He is getting mature through his problems with people. He is also faithful, therefore he protects Saeed from the police’s doubt. His girlfriend, Cherisse is also pretty, but she is not smart. She is jealous when Tom hugs his friend’s sister, therefore she took a photo to ruin their reputation through cyber-bullying. Eventually, Tom becomes interested in the other girl.

Saeed is also one of the main characters in the story. He is not good at speaking English, but he is really good at soccer. Futhermore, their rival soccer team tried to get him, but they couldn’t. Saeed joins the Chamberlain soccer team and they win the championship. The characters in this book usually use a lot of swears, which is used to show how teenagers’ feel. Saeed appears out of nowhere, and he also leaves out of nowhere.

Tom Bouchard met Saeed Bashir a Somali refugee, that came to live in his hometown, and they both played soccer for Chamberlain High School, and even though that Saeed didn’t speak English well he became friends with Tom.

Saeed’s culture, and religion were very strict. When Tom got to know Saeed background and why he came to the United States he started to understand why Saeed wasn’t allowed to do certain things due to religion, and culture.

Friendship was very important for Tom. He became more involved in Saeed life and trying to help him with some issues, and instead of helping Saeed he made it more difficult for him.

Maria Padian, the author of the book "Out of Nowhere", beautifully describes a wonderful small American town. When reading the book, you can immerse yourself in American life. The author’s descriptions of the setting creates a climate with which the reader can get familiarized with the unique nature, environment and architecture of an American town. The Author’s detailed setting makes it possible for the reader to move into the past. When you read the book sentence by sentence, you can become one of the high school students in this small American town. It is a small, peaceful town where life goes slowly for the residents. In the town, you will find a typical American lifestyle. The residents live in classic American homes and drive typical American cars. In the town, almost everyone knows each other and they often raise their hands to greet one another. On one hand, the scenery is calm. On the other hand, the scenery is loud and noisy with students playing soccer at school. The school, the soccer field, and the surrounding area of the small town are the main places within the story. This image of America for many people from all over the world has become a symbol of freedom, especially for the Somali people. After the war in Somalia, Africans came to America and some of them settled in small town America. Combining American lifestyle with African folklore has made life in this town even more interesting and colorful for the residents.

The religion is a doctrine that some people believe, and among the religions, there is the Islamic religion. The Islamic religion is monotheistic and they worship one God whose name is Allah and Mohamed, the messenger of God. Islam is the second largest religion in the world. It has many rules that are well known like suppression of alcohol, prohibition of fornication and banning of adultery. Unfortunately, some of these Islamic rules are not always respected and it is the same case in most religions. Indeed, on some occasions, some Muslim people, often young, break these rules. In my home country, for example, during Christmas and New Year’s that are two celebrations exclusively reserved to Christian people, some young Muslims who are not married, participate with some girls to these two events in drinking alcohol and smoking. Other Muslim people prefer to spend their time in the night clubs. Elsewhere, some young Muslim people have sexual relations before their marriage. It is the fornication. I had a friend during my studies in high school whose girlfriend was a Muslim. The Islamic religion is not the one religion to have this problem. Most young people in other religions and worse, some religious people do not give a good image to the religion they represent. It is the case in the Catholic Church where the priest or clergy are accused of sexual abuse with the boys in their parish. In conclusion, there are many different religions in the world, and people celebrate religions differently. The true religion must be in the heart of each.

Quote 1: “No Money, no honey” is a quote that talks about living and money.

No money can mean you don’t have a job, you can’t contribute to people’s lives, and so no one respects you.

No honey means you won’t have a love relationship; if you don’t have money, a lover will not want to be close to you because you won’t be able to take care of the person.

If you don’t have money, you won’t have a stable life, because our societies require money for someone who can give happiness to a lover.

Quote 2: “Our ancestors came her to work. These people came here to collect welfare”

I think their ancestors were poor originally and wanted to have a better life, so they moved to another place. Ancestors move to another place to work hard and earn their money. Now they can just stay here, not work hard, and get good welfare.

The immigrants wanted not to work, but now, people just collect welfare.

For example: I think that is really similar to China now. Because originally they were really poor, but via a big policy change, they suddenly became rich. Their children don’t want to get a job, but they spend a lot of money. They don’t worry about anything.

Linked by Soccer: A New Friendship

Out of Nowhere is a well-written fiction book by Maria Padian. The book is about a sincere relationship between young people living in the same town and pursuing the same goals. There are many interesting themes developed within in the book associated with soccer, immigration, religion, and race. For Saeed, Tom and their other mates, friendship is an important theme because it is necessary to build a stronger relationship other than just being teammates and classmates. The fact is that the Somalian kids used to be invisible to the soccer team and the school. However, Tom, the captain of Enniston’s high school soccer team and one of the most popular and influential students at school, saw their potential to play soccer when he witnessed them play. This was the beginning of a long friendship for all of them despite their differences. Trying to understand the Muslim religion and Somali culture expressed by his new friends, Tom is no longer sure about who to hang out with and the merits of his relationship with his friends, family, and the residents of the town. He becomes closer to Saeed and his other Somalian teammates. In addition, he learns to avoid racial stereotypes regarding immigrants and Muslims. Consequently, he supports Saeed and the other Somalians when they are persecuted by some people questioning their eligibility to play on the team because they are immigrants, Muslims, and probably older than the other players.

Rhonda is using Smore newsletters to spread the word online.

Follow Rhonda Petree
Contact Rhonda Petree
Embed code is for website/blog and not email. To embed your newsletter in a Mass Notification System, click HERE to see how or reach out to support@smore.com