Get email updates from I:

Followers of Judaism are called Jews. They practice prayer and a Sabbath day from Friday evening to Saturday evening. Their Holy Book is called the Torah or Tanakh. They follow God's laws, including the ten commandments. God considers all people equal. Some on eat kosher foods and no pork, shellfish, or mixing of milk or meat products. At the age of 13, one is now a full member of the congregation after a boy celebrates a Bar Mitzvah or a girl- Bat Mitzvah. Their place of worship is called a Synagogue. Their worship leader is called a Rabbi. Their Holy Days are Rosh Hashannah and is their new year and when fasting starts. Yom Kippur is when fasting ends and is a celebration. Passover, referring to the Angel of Death who "passed over" Hebrews who were in bondage in Egypt. Hanukkah celebrates the miracle of oil lasting eight days when only enough for one day in Temple. Jerusalem is their Holy city. The Wailing Wall is believed to be part of the once, Holy Temple.
Common religious figure to all three religions is Abraham. Also, a common view shared between all three is monotheism, that there is only one God.

The place where Jews worship Yahweh.

The five books of Moses that the Jews studied.

Baptism as a Holy Sacrament

Public proclamation as a follower. 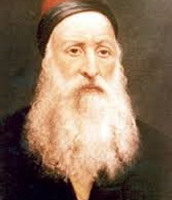 A Jew's teacher and guide.

It also know as the Western Wall is in Jerusalem and is believed by many people to be the remains of one wall of a great Jewish temple or the wall surrounding the temple's courtyard.

The double triangle of the Star of David symbolizes the connection of both the inner and external dimensions of God, Torah and Israel.

Connect with I Buffington