What about Ronald Reagan?

I want to construct a Monument for Ronald Reagan in Washington DC. There is a monument to Ronald Reagan in Warsaw because of his impact on the outcome of the Cold War and one in California which commemorates him as a governor.This monument will be different because it will show gratitude for his decisions during his term as president. The statue will be 9 feet tall 1400 pound marble statue with a plaque which says "morning in america".

Who was Ronald Reagan?

Ronald Wilson Reagan was an American politician and actor who was 40th President of the United States from 1981 to 1989. He set a precedent for political policies that seem to impact presidential candidates every electoral season. He not only ended the Cold War, but cut unemployment in the USA during his precidency from 19.99% to 9.72%.

The Statue will be 9 feet tall and weigh about 1400 pounds. This would mean the statue itself would cost $2100 for material. Ronald Reagan motto "Morning in America" would be engraved into the plaque underneath because that was his inspirational catch phrase.
Ronald Reagan TV Ad: "Its morning in america again"

Who would oppose this monument?

Modern regressive liberals because of Ronald Reagan's' image to the Republican party who believe that Ronald Reagan did not help the most social security programs as opposed to spending on space exploration. 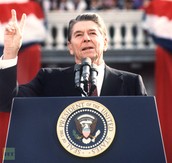 Who would fund this monument.