Kei is using Smore newsletters to spread the word online.

Get email updates from Kei:

Malaysia is a beautiful country. If you love to do adventures and love nature, then come to Malaysia to climb some mountains, go to the rain forest, sandy beaches, largest cave chamber in the world, biggest flower in the world, and has the 4th largest tower in the world and tallest in the Southeast Asia. Malaysia has fine architect too. For example oldest Anglican church in Southeast Asia and the Penang Bridge is the 3rd longest bridge in Asia.

Malaysia has a lot of resources like large amount of wood, rich in minerals (tin, iron ore, copper, bauxite, oil, and natural gas) , high-technology, and consumer goods. If you visit Malaysia, Malaysia's 22.7 million people belong to the Malay ethnic group. Most people are Muslims, but there are large numbers of Hindus,Buddhist, and Christians. Also the people speak Malay, Chinese, Tamil, and English.

Sabah Malaysia in home of the Worlds largest flower.

When you are done going a long walk through the mountains, you can cool down swimming in the beautiful ocean.

The 4th tallest Towers in the world and tallest in Southeast Asia.

The Petronas Tower- The Tallest building in the World 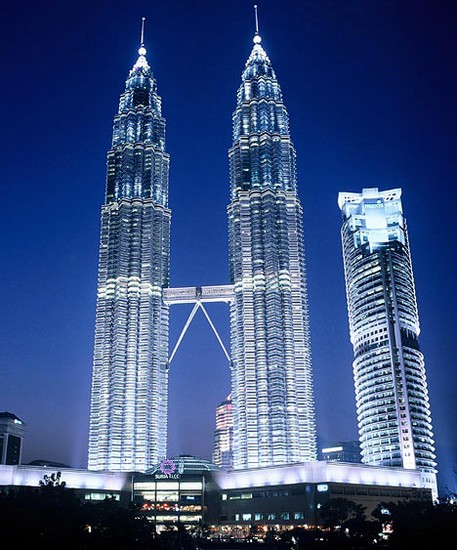 Malaysia- Home of the Resource

Malaysia generally has 2 seasons. The dry season is from May to September. The rainy seasons is from November to March.

Malaysia is located in Southeast Asia and is made up of 2 regions. The Peninsular Malaysia and the East Malaysia. There are over 28 million inhabitants in the country and Malaysia is located just above the equator. Malaysian fertile soil is mainly foe oil palms,tea,cocoa plantations, and rubber trees. This makes Malaysia one of the main supplies of palm oil, tea, and rubber worldwide and more than half of Malaysia surface is jungle.

Malaysia above the Equator

Malaysia People- Malaysia's population is over 20 million people. They have a multiculture and multiethnic population of Malay, Chinese, Indians numerous indigenous/native people. In Malaysia Malay is the officially language but English is widely spoken, especially in business, and the English language is a subject in all schools. Malaysia official religion is Islam, but its people are free to do any religion of their choice. At any place in Malaysia, it is common to see temples, mosques and churches.

Ethnic Groups: 59% Malay and other indigenous race, 32% Chinese and 9% Indian.

Malaysian Culture- In Malaysia there is a traditional greeting of "Salam" resembles a handshake with both hands but without the grasp. The man offers both hands, lightly touches the visitor's hand, and then bring the hands to their chest which means, "I greet you from my heart". The visitor should reply the "Salam."

Malaysian Traditional Food- In Malaysia most Malaysian food is spicy and the common ingredient is Coconut Milk. In Malaysia the True Malay traditional food should be prepared using only local ingredients. Meals are cooked over an ancient-styled oven or stoves. They would stir with traditional utensils and packed or served in tropical edible leaves. But they eat using there hands, following Malay table manners.

One of the Malaysia multiethnic groups

One of Malaysia Temples

They are shaking with 2 hands

A sweet and savory cakes.

Meat on a stick.

Malaysia Government is a Federal Constitution Monarchy. They have 13 states and 3 federal territories. Malaysia government system is closely modeled on the Westminster Parliamentary systems. The legal system is based on the English Common Law. A man named Yang di-Pertuan Agong is the head of state of Malaysia. The head of the government is the Prime Minister.

Head of State of Malaysia.

Malaysia Economy- Malaysia is one of the world's leaders in exporting rubber and palm oil. Malaysia is also rich in minerals like tin, iron ore, copper, bauxite, oil, natural gas and has large amount of wood to export.

Malaysia factory workers make high-technology and consumer goods. But Malaysia's ports are important center to trade. Malaysia rich natural resources develops in agriculture, forestry, an mining. The nature resources helps the economy and travel deals are easier to come by.

Kei is using Smore newsletters to spread the word online.

Follow Kei M.
Contact Kei M.
Embed code is for website/blog and not email. To embed your newsletter in a Mass Notification System, click HERE to see how or reach out to support@smore.com
close