Family Bible time for the week of August 16-August 22

Family Bible time for the week of August 16-August 22 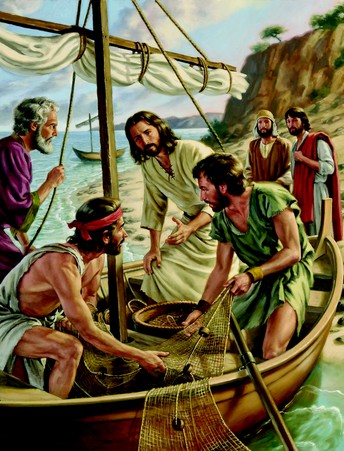 After Jesus was baptized, John the Baptist continued to point to Him, telling people, “Behold, the Lamb of God!” Andrew, who had been following John the Baptist, turned to follow Jesus. Andrew told his brother Peter, “We have found the Messiah!” and he brought Peter to meet Jesus.

Jesus began healing the sick and teaching about the kingdom of God. One time, He was teaching by the Sea of Galilee. He got into one of the fishermen’s boats (it happened to be Peter’s) and taught from the water. When He was done, He told Peter to throw out his nets again for a catch. Peter didn’t want to. He had been fishing all night with nothing to show for it. But he did it anyway. Pretty soon, there were so many fish the boat began to sink! Peter was afraid, but Jesus said, “Don’t be afraid; from now on, you’ll be fishing for men!” What do you think those fishermen did?

Dear Jesus, help us listen and learn about following You and sharing Your love. Amen

Peter, Andrew, James, and John were fishermen. Jesus asked them to leave their fishing nets, follow Him, and “catch” people by telling them about God’s love.

Share your thoughts about being one of the fishermen that Jesus called.

Jesus calls us to follow Him, just as He called the disciples. We follow Jesus when we listen to His Word and share His love with others.

Dear Jesus, thank You for calling us to be Your disciples. Help us to spread Your love and forgiveness to all the world. In Your name we pray. Amen.