All Havoc is Wreaked with Bacon's Rebellion - 1676

All Havoc is Wreaked with Bacon's Rebellion - 1676 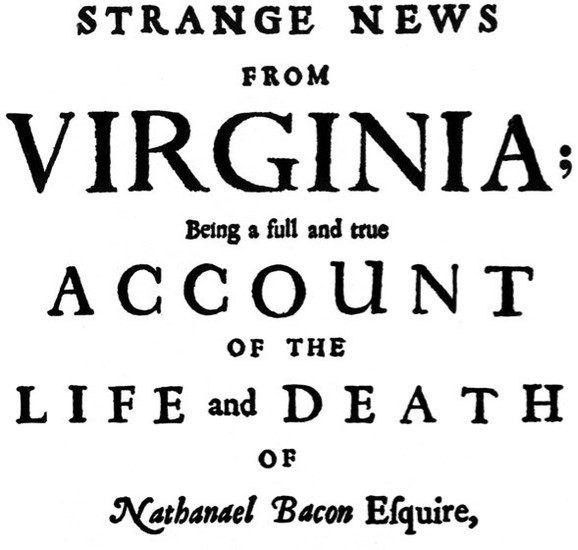 The Grandeur of the New World

In recent times, the Jamestown settlement has reached new heights with the development of tobacco. The Chesapeake region has been thriving like never before, and populations have now soared over thirty thousand persons. Compared to the first few years of harsh winters and what seemed like endless struggle, this society has flourished. Politically, the Virginia Company had established House of Burgesses, allowing for our own executive decisions, with the aid of our current colonial governor, William Berkeley. In contrast to the past sixty-nine years of settlement, the economy of tobacco has guaranteed the success of settlers in this new, foreign land, by virtue of the Colombian exchange and the export of tobacco. With the headright system, indentured servants have been the new win-win situation, as more land gives citizens more power and voting rights with each indentured servant's passage to the New World. All is currently well, and daily life for the colonists are hard, but rewarding. However, the settlers are feeling an eerie chill in their hearts, as if something terrible were about to happen. The thoughts of insurrection has seemed to penetrate the minds of many landless men, and the Indians are beginning to aggravate the colonists, as the Indians have much land that is not under the colony of Virginia.

The beginnings of the great colony of Jamestown funded by the Virginia Company as settlers arrive from Great Britain on the Susan Constant, the Godspeed, and the Discovery. In 1607, Jamestown became the first settlement for the English, marking the beginning of a rise in the mother country's wealth and power.

As civilization soon sprouted in the New World, the colonists survived through the harsh winters as well as disease, which marked the death of many due to a lack of immunity. However, by overcoming such an obstacle, the survivors continued to build up a potential town, driven by Christian ethics and the seeking of wealth, the new land served as a blank space for any of the settler's goals. 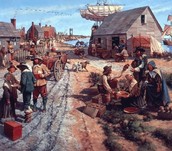 Religion did not play out very successfully as the society became agriculture dominated. Once Jamestown had invested in tobacco, the economy began to thrive, indicating an advancement in daily life. The work required to maintain tobacco was strenuous, leading to the rise of indentured servitude in the early 17th century.

Revolt! The Time of Chaos!

Nathaniel Bacon, Jr., Governor Berkeley's cousin by marriage, led an uprising that swept through Jamestown in 1676, but the actual conflict began in 1675. The Doeg Indians had raided Thomas Mathews in the Northern Neck section of Virginia, which enraged the fellow colonists; they retaliated, but attacked the Susquehanaugs instead, upsetting the Indians and increasing tensions with them. Governor Berkeley attempted to resolve this dispute by punishing colonists while trying to remain on good terms with the Indians and declaring war on the "bad" Indians, which only enraged the community even more. The result of this event, called the Long Assembly in March 1676, damaged private trade relationships, including those that Bacon had. Bacon then rallied troops that attacked and raided friendly Indians' lands, disobeying Berkeley's orders along the way. Over time, Berkeley sought to compromise with Bacon, baiting him with a seat in the House of Burgesses. Although Bacon accepted, he would not back down until he was appointed General against the Indians, which occurred in the Assembly of June 1676. Soon, Berkeley, began to crumble under the increasingly overwhelming support for Bacon. In July, while Bacon took control of Jamestown and began his reign, Berkeley fled to a safe haven.

Berkeley challenging Bacon and his men to shoot him at the Assembly of June 1676.

"And this we, the commons of Virginia, do declare, desiring a firm union amongst ourselves that we may jointly and with one accord defend ourselves against the common enemy. And let not the faults of the guilty be the reproach of the innocent, or the faults or crimes of the oppressors divide and separate us who have suffered by their oppressions." - Declaration of the People of Virginia

As Bacon's reign continued, he issued the Declaration of the People of Virginia at the end of July, as it made him feel triumphant. Bacon had expressed that Berkeley was a corrupt governor who had played sides for personal gain. Bacon built up his personal troop of tight, loyal individuals who was eventually secretly infiltrated by Berkeley's troops. Finally, Berkeley's troops captured Bacon and his group of followers. However, Bacon was not going down without a fight, so he set Jamestown ablaze in September, as it was too fortified to fight back. As Bacon lost his power, one tragedy led to the next. On October 26th, Bacon died of "Bloodie Flux" and "Lousey Disease", severing the head of the rebel force. Berkeley regained full control of Jamestown, eliminating any remaining rebel forces--the rebellion had come to a close, but left the town with many questions. What was the effect of the rebellion, and how were indentured servants now viewed? It is bound to lead to inevitable changes in the colonial governmental structure, but also initiated a quest of finding the American identity. 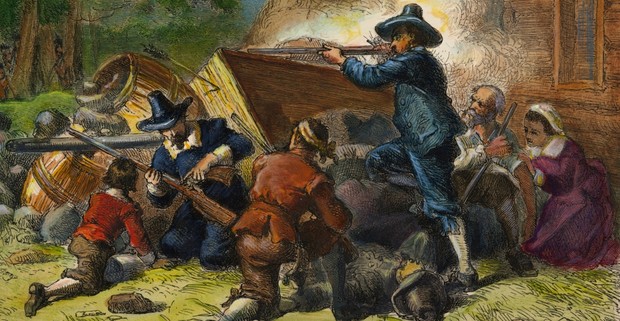 *Indians are used instead of Native Americans in order to express the point of view of a Jamestown settler.
Primary Source Documents from Bacon's Rebellion (here), under "Featured Primary Sources"