Get email updates from Mariah: 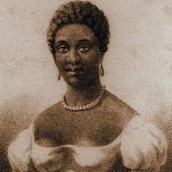 Phillis Wheatley was born on May 8, 1753 in Senegal. She was purchased by Susannah Wheatley, wife of tailor John Wheatley in 1761 to be their personal slave when she was only 8 years old. She was brought over on a boat named "Phillis" where she got her first names, her real name remains unknown. She learned how to speak and write English very quickly because the 18 year old daughter of the Wheatley couple, Mary Wheatley, taught her. Within 16 months she could read difficult passages. This soon lead her to master Latin and Greek and then she began to write poetry. The Wheatley's admired her talents and showed her off to friends. After learning how to read, write, and speak English she began to compose poetry. She published her first poem at age 12, which brought her fame and recognition worldwide. Though the publishers in Boston refused to publish her work, she was not disheartened. Phillis, along with the son of her master's, Nathanial Wheatley, went to London, to get her book published. After Mrs. Wheatley died in 1774, the family parted ways and Phillis married a free slave, John Peters, and settled in Delaware. She later abandoned her husband and began working in lodging houses. She died alone from complications resulting from the birth of her third child on December 5, 1784.

Importance During the Revolutionary Era

Her book of poems, "Poems on Various Subjects", featured thirty nine of her poems. Her popularity grew very much in United States and England. She also gained freedom from slavery, on October 18, 1773. In the March of 1776, Phillis Wheatley gave a presentation of her poetry to General Washington. During the revolutionary war, she was strongly against slavery and enslaved labor. She was of the opinion that independence should be a right of each and every person in this world. 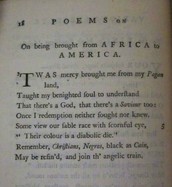 Phillis Wheatley's opinion on everybody should have independence and be treated the same was expressed in her poem "On Being Brought" which mixes with the ideas of slavery, salvation, and Christianity. Even though most of her works are written on a salve being took from Africa to America, this poem stresses her importance of the ideas on liberty, religion, and racial equality. She isn't really concerned with narrative poetry, she's into more expressing and praising the ideas Christianity, salvation, and slavery or in general on how everyone should have the same independence rights no matter who anyone is.

1771 - An Elegaic Poem On the Death of that celebrated Divine, and eminent Servant of Jesus Christ, the Reverend and Learned Mr. George Whitefield

1773 - Poems on Various Subjects, Religious and Moral (title page and frontispiece of 1773 edition), To His Honor the Lieutenant Governor on the death of his Lady, An Elegy, To Miss Mary Moorhead, On the Death of her Father, The Rev. Mr. John Moorhead

1784 - An Elegy, Sacred to the Memory of the Great Divine, the Reverend and the Learned Dr. Samuel Cooper, Liberty and Peace, A Poem

1776 - To His Excellency George Washington

1834 - Memoir and Poems of Phillis Wheatley, a Native African and Slave (also by Margaretta Matilda Odell) 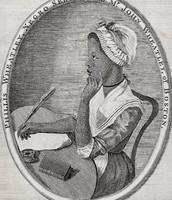 Statue in Memory of Phillis Wheatley 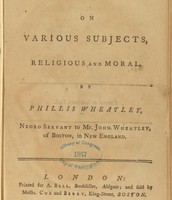