*Quote that Best Represents the Character:

-"In real life I am a large, big-boned women woman with rough, man-working hands." "....I can kill and clean a hog as mercilessly as a man. My fat keeps me hot in zero weather. I can work outside all day, breaking ice to get water for washing;..."

*Type of Character: Round & Static

-Explanation/Reasoning: Momma is a round character because she had depth, you can describe Momma in more than one or two words. Example: Momma is a hard worker, we know this because she says "...I am a large, big-boned women woman with rough, man-working hands" & "... I can work outside all day, breaking ice to get water for washing;..." Momma is a character that has many complexity in her. This character is static because she don't change threw out the story, during the story of "Everyday Use" this character keeps the same personality as she does when they first introduce her to you.

-Explanation/Reasoning: This quote that best represents this character exemplifies that shes a direct character because it comes straight out an tells us what she's like. How she's a hard worker, has man-working hands, it tells how she don't care to work outside all day breaking ice to get water for washing clothes. 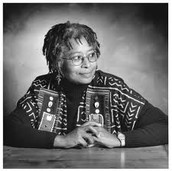 Alice Walker was born in the small town of Eatonton, Georgia, she was the youngest of eight children. Her father was a sharecropper, and her mother worked as a maid. Alice was also blinded in one eye by a shot from a BB gun when she was eight. 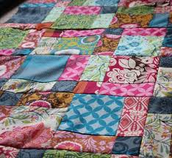 The quilts where stiched by them, it's something Maggie helped with, her and her mom, its a heriadity that momma & Maggie have it shows how the live, its a skill they have.

The house shows how Maggie and Momma live. They don't care about having a fancy home or nothing. They sorta live like back in the day kind of home.