Get email updates from Maeve:

Welcome to The Wizarding World!

Welcome to The Wizarding World! 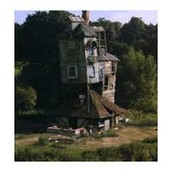 Vacation with the Weasleys

The Burrow is a modest little home where the Weasley family resides, and though Harry only gets to visit every so often, it seems like more of his home than where he lived on Privet Drive for most of his life. Despite the enchanted clock that has everyone's name in the family constantly pointing at "mortal parral", and Mrs. Weasley's jumpiness since it was confirmed Voldemort has returned, most things at the house are fairly normal. Although many situations have been troubling the Weasley's, there's still a sense of happiness and family love in the air. On one of the days of Harry's visit, the Weasley, Potter, and Granger clan all go down to Diagon Alley, which is looking especially worse for wear since dark wizards have been roaming the streets once more. Many of the shops have been closed and the area is much more sketchy now. The characters are all obviously depressed that their beloved Diagon Alley has fallen into such turmoil. The one glimpse of color and fun left in the alley is the Weasley's Wizard Wheezes joke shop that Fred and George have opened. The business has been a huge success and the twin's comic relief makes everyone more cheerful for a moment. Soon though, it is time for all the kids to go back to school for the rest of the year. 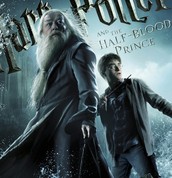 This setting is from when they go to get a horcrux in the cave.

Compared to Snape, anyone or anything could make the Potions room in the dungeon seem more cheery. In this book, when Professor Slughorn begins teaching potions, and when Harry finds the Half blood Princes's book, things in the Dungeon have a much more positive vibe than in previous books.

This picture is of the outside of Fred and George Wesley's Joke shop, brighting up the otherwise gloomy Diangon Alley.
Harry Potter and the Half Blood Prince - Official Trailer 2 [2009] [720p HD]

Even as they begin to enter the school off the train, it is clear several changes have been made at Hogwarts. Security measures have been heavily increased, making it all the more obvious the school is trying to protect itself against the Dark Lord, who has now begun to rise again! But as they make they're way towards the actual castle, you can tell that the basic lay out of the school remains the same as it has for the past 5 years.

Harry's favorite class is Defense Against The Dark Arts, which he was expecting the new professer, Professer Slughorn to teach. Instead, Snape finally gets his dream job and claims that class, and Slughorn is left with teaching Potions. Both teachers make big changes to the setting of their rooms. The normal Defense against the dark Arts room had already undergone several changes from year to year with all the different teachers, but when Snape takes over, he makes it the most dark out of all of them. From the blinds being constantly drawn, to the paintings of people suffering from the three unforgivable curses on the wall, Snape made it as homey for himself as possible. For all the other students ;however, the room has a very creepy effect. On the other hand, Slughorn makes Snape's old Potions room ten times more cheery, a bit like his personality compared to Snape's. The Dungeon is filled with light and the new Professer's aura fills the space.

About the book setting

In the thrilling 6th book of the series, Harry Potter and The Half Blood Prince written by J.K Rowling, starts to weave together the idea of everything from the past books coming back to play at the end. By doing this, the characters revisit some of the older places they would go in the earlier books, but with a twist because as the times change as does the feel of the school. On the other hand, Harry does get out of the castle a few times in this book. One of the major changes in scenery happens when Dumbledore takes Harry to a dank cave in the middle of the sea, where they must battle the evil defenses put in place by Voldemort to hide, what readers learn to be, a Horcrux. The setting of this book is relatively similar to that of the other ones; however, since Voldemort's back, it coats the Wizarding World in darkness, leaving behind that lighter appeal. Harry, Hermione, Ron, and Ginny are forced to grow up faster, as people are more conscious of how they might not have that much longer to live, and want to make the most of the moment.
Check Out this Game to See More Of Hogwarts!