Mahatma Gandhi was a leader in the Indian Independence Movement. He fought against the unjust law of the British during the 1930's. Gandhi used non-violent means to obtain his goals. He became the face of the movement, and later he freed India from the chocking hold of the British Empire.

Gandhi, along with thousands of Indians, marched some 240 miles to the Arabian Sea to collect salt in defiance of the Salt Acts put in place by the British to limit India's freedom.

On several occasions Gandhi spoke with British leaders, on behalf of the Indian people, about the unjust laws. Gandhi said he listened to a higher power. 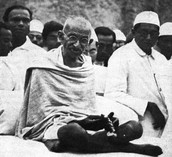 Gandhi once said "Be the change that you want to see in the world". Gandhi saw injustice in the world and acted on it. He made a change and riled others to follow him to ignore laws he believed were unjust.
Footage - Gandhi - 1930 April, #02
More information about Gandhi and his Salt March.

The Salt March was one of the biggest and most public acts of civil disobedience that Gandhi performed.

While Gandhi was in jail in South Africa he read Thoreau's "Civil Disobedience" and it became the basis of his theory of nonviolent protest. In Gandhi's time the British had an oppressive rule over India and enacted many unjust laws. Gandhi wanted change, he did not want "no government, but at once a better government"(Thoreau). He never sat around and waited;instead, he created change and brought India out of a dark time. Furthermore, Gandhi suffered for his beliefs. Like Thoreau, Gandhi spent time in jail for standing up to the oppressive government, and they both used that time for reflection and solidifying their beliefs. Gandhi is a great representation of the points of "Civil Disobedience".