Get email updates from Miss:

Have you heard about Super bowl XLIX? Sunday February 1st in Phoenix Arizona The Seattle Seahawks vs. New England Patriots played in the Super bowl. That night the shocking super bowl happened. The Seahawks were at the 1 yard line! Pete Carroll made a shocking call. He passed the football and the patriots have great defense against the Seahawks .The pass led to an interception! People say this super bowl was one of the most exciting Super bowls. Pete Carroll took the blame for the Seahawks loss. It's not Russell Wilson's fault that he made the pass to their tight end Luke Miller and he was under pressure.That's how this Super bowl was so exciting! The patriots won 28-26. Malcolm Butler made the interception to win the game.They should of ran it with one of the greatest running backs in the NFL, Marshawn Lynch. Tom Brady was MVP of the Superbowl. Wow, that's what I call a shocking Super bowl.

We got our information from Time for Kids. 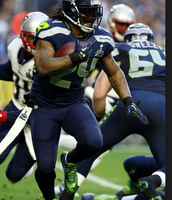 Marshawn lynch was one of the best running backs in the league.

Malcome butler made the final interception to win the game.

Follow Miss LeFevour
Contact Miss LeFevour
Embed code is for website/blog and not email. To embed your newsletter in your email, click HERE to see how or reach out to support@smore.com