Teams in the Negro Leagues

Jackie Robinson played in the 1945 Negro League All-Star Game where he went zero-for-five (0-5). On the Major League level appeared in the following games:

In 1994 the Rookie of the Year Award was officially changed by Major League Baseball to the Jackie Robinson Award. This proved that he was a successful baseball player! He was so good that they changed the award in memory of him.

Life in the Negro Leagues 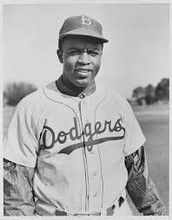 What teams did Jackie Robinson play for?

In the whole of Jackie Robinson's career he played in the Negro League for one season, but the name was not listed. He then was asked to join a professional American team the Dodgers. He was asked by Branch Rickey.