Lexe is using Smore newsletters to spread the word online.

Get email updates from Lexe:

Who were the Afrikaners: Groups that came over together.

Group from Europe: The British

Boer War: Broke out in 1899 and raged for 3 years. Afrikaners accepted the British rule.

Independence: Left the British Commonwealth to become independent in 1961.

After Independence: Were moving out of the confining reserves into cities.

White governments fear of black south Africans: Whites were afraid that the blacks that were crowding into the townships, or settlements near the cities might claim a right to live there permanently.

Homelands: Arbitrary Regions, they wanted to make a movement through the cities.

Apartheid: Created by Whites. It means apartness and its a system.

Sanctions placed on south Africa: Are actions that punish a country for behavior of which the international community does not approve.

F.W de Klerk: He was a Reformer and he made changes.

Nelson Mandela: He was a leader of the African National Congress.

1994 Elections: The first truly free elections were held than.

South Africa Today: A new constitutions was certified in 1996 and it use to be a repressive police which is now a peaceful political change. 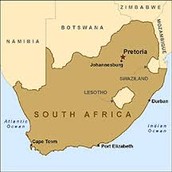 Lexe is using Smore newsletters to spread the word online.