F. Scott Fitzgerald’s book, The Great Gatsby, uses a lot of imagery and symbols to represent larger ideas in the book. Throughout the book the author uses the characters to really describe through imagery the decline of the American Dream and the trickle down effect on the central love affair, sexism and the social classism that drives each theme. The symbols being used in the book offer insight to understanding the tone of each character's voice or attitude because of the social ramifications of the myth of the “American Dream.”

In The Great Gatsby the author further describes each theme that supports sexism and how women are viewed by the author's analogies as he describes women in chapter 7. which further emphasizes the time period the author lived in. In chapter 7 page 115, it says “The room , shadowed well with awnings, was dark and cool. Daisy and Jordan lay upon an enormous couch, like silver idols weighing down their own white dresses against the singing breeze of the fans.” This quote gives us readers a clear precise view of where the location is and how it looks in clear detail. Additionally, this gives us an idea of what the room feels like in detail but as it relates to women as artifacts rather than people. Women occupying any space during that time period had very little significance in comparison to an enormous couch. The narrator uses `silver idols', to describe the women’s presence and white dress to define their purity. The detail the author gives to describe the lavish but cold space gives us an image of what the wealthy lives like.

The symbolism used throughout the book ,The Great Gatsby, makes use of color and the characters personality. One example from the text in chapter 2 where Fitzgerald describes another woman, page 30 says, “The sister, Catherine was a slender worldly girl of about thirty, with a solid,sticky bob of red hair, and a complexion powdered milky white. Her eyebrows had been plucked and then drawn on again at a more rakish angle but the efforts of nature towards the restoration of the old alignment gave a blurred air to her face. When she moved about there was incessant clicking as innumerable pottery bracelets jiggled up and down her arms.” This last quote shows the imagery being used to give us in detail what Catherine looks like and her body movements that allow us to get a better understanding of what she might wear or how her body language might look like. The author uses specific details to describe her which further pushes stereotypes created by men for women or how they should be appealing. For example, “a complexion powdered milky white”, this specific description tells us what race she is in the book, to let us have a better understanding of how she might interact with the rest of the characters in the book and her place in society. .

The Great Gatsby has many different, symbols and imagery in this book ,In chapter 2, page 29, it says “The living room was crowded to the doors entirely too large for it, so that to move about was to stumble continually over scenes of ladies swinging in the gardens of Versailles.The only picture was an over enlarged photograph, apparently a hen sitting on a blurred rock”. This quite gives us a clear view of what the location is and what it looks like in detail. Furthermore, this also gives us an idea that it is somewhat empty, it says “The only picture was an over enlarged photograph”. This quote explains to us that the imagery that is being used in the book conveys that the author is constantly referring to imagery that expresses loneliness, emptiness in a world which is supposed to have everything which also further pushes the “American Dream” is really an “American Myth.”

In conclusion, The Great Gatsby’s author, Fitzgerald uses lots of imagery and symbols to represent larger ideas in the book, like;“The American Decline” which channels themes like sexism, classism and love affairs. These themes are evident through the author's use of the characters to really describe the imagery. The symbols being used in the book also help a lot understanding the tone of each character's voice or attitude. The need to obtain and maintain the idea of the American Dream in a world that celebrates ideas that suppress and reject true freedom is all but “American.” 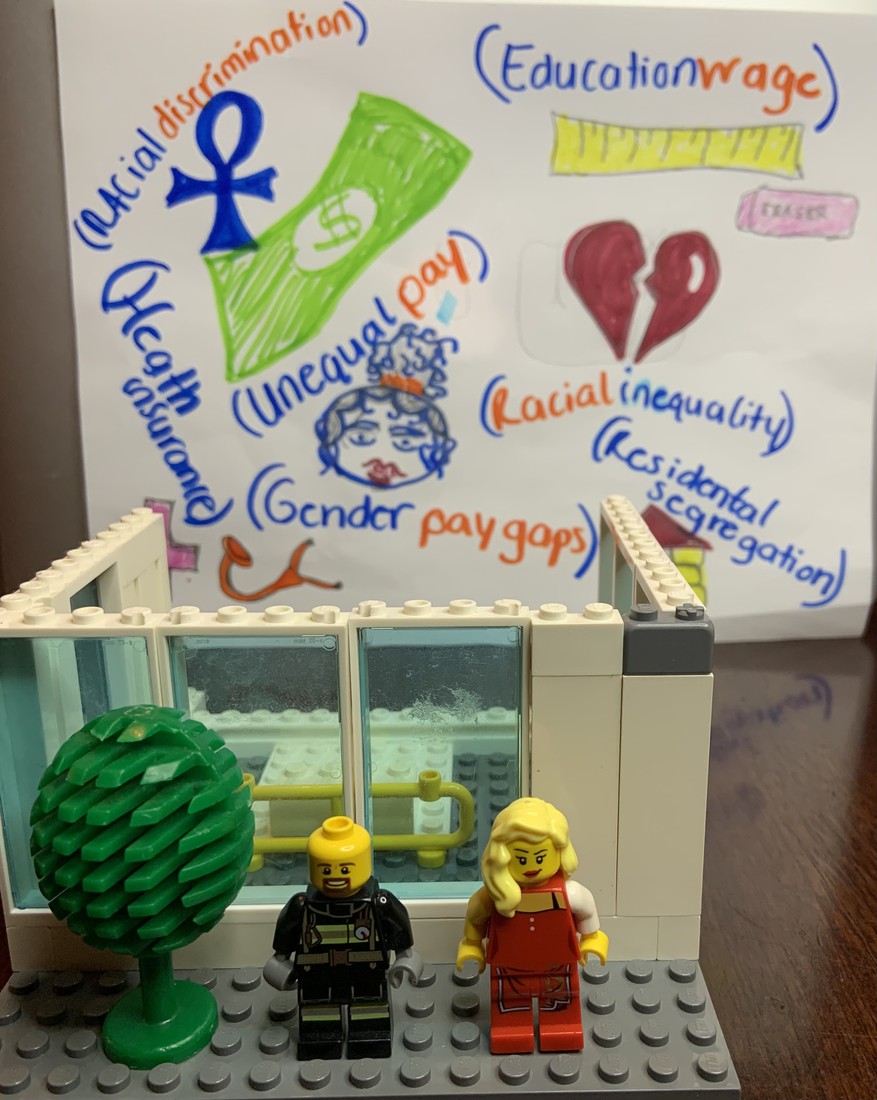 The American dream, the ideal dream in which equality of opportunity is available to any American, allowing the highest aspirations and goals to be achieved. Being able to achieve this dream from the ground up is the dream. Having the ability to be able to have a house, car and economically stable is the American dream. The dream is something that everyone in America wants because it is what we are taught you need to have to be successful in life. But working hard to achieve this is not easy at all. There are many different boundaries like education wage,racial inequality , residental segregation, racial discrimination, gender pay gaps and unequal pay. These boundaries are all things that hold minorities in America back.
Embed code is for website/blog and not email. To embed your newsletter in a Mass Notification System, click HERE to see how or reach out to support@smore.com
close